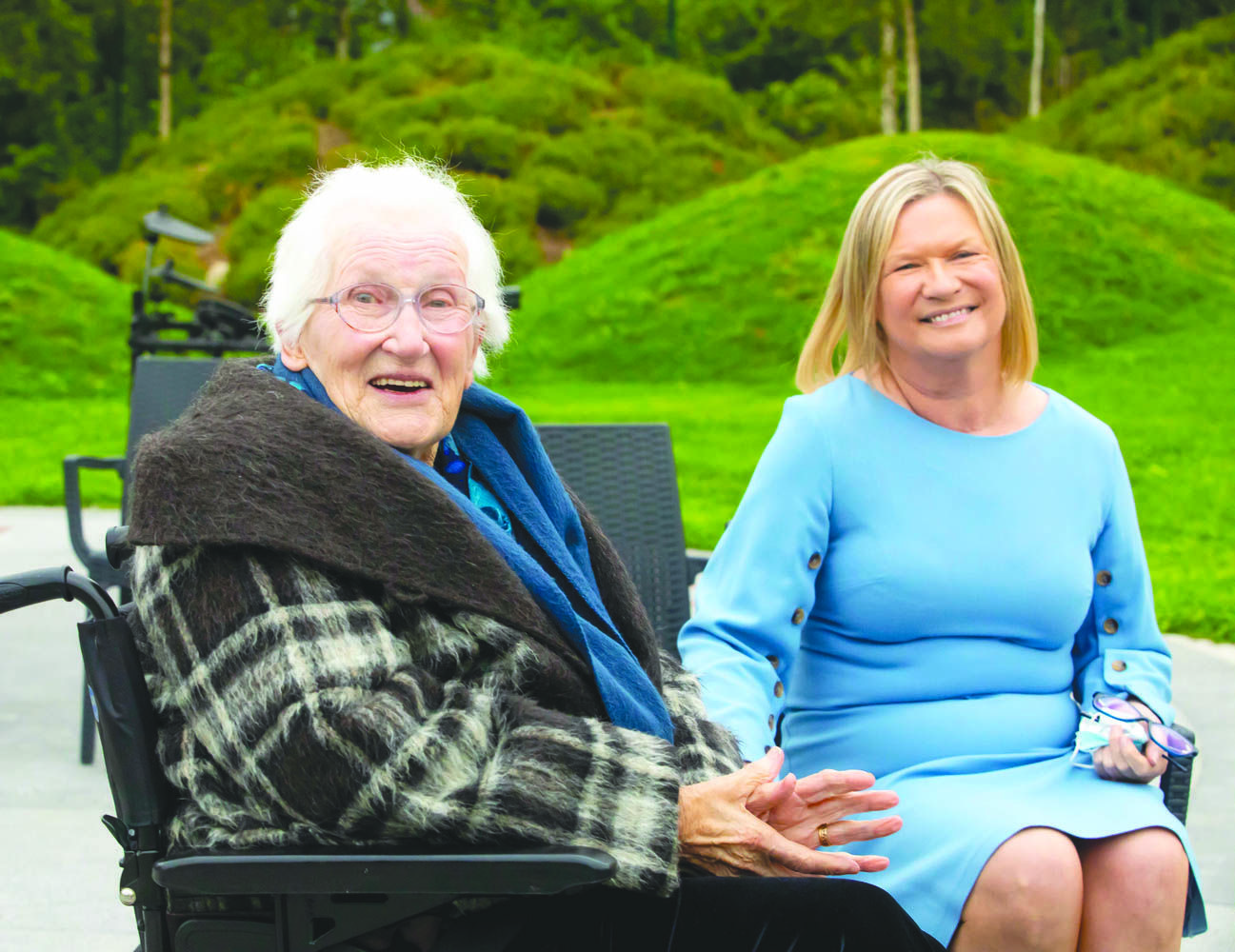 The 2021 Kennedy Summer School last weekend saw a gathering of political commentators, historians and journalists reunite for the first time since 2019 in New Ross, County Wexford as political discussion on the future of Ireland in terms of Brexit, post-pandemic, and Ireland's relationship with the U.S. and more was up for debate.

Commencing the summer school events was a poignant occasion at the New Ross Library Park as the 20-minute color film of JFK’s arrival to New Ross in 1963, captured by now 98-year-old local lady Peggy Walsh, was premiered with Peggy and her family as special guests.

Said a release: Two hundred people enjoyed the outdoor screening and interviews and RTE’s Eileen Dunne described Peggy as "ahead of her time." A new award has now been created in Peggy’s name, “The Peggy Walsh Award” which will recognize emerging female talent in film making by Screen Wexford.

Thanks to everyone who made #JFKSS 2021 possible - our committee, our sponsors, our brilliant speakers, the staff @StMichaelsTheat and of course, you the audience! All sessions will soon be available at https://t.co/wkFPU30dlD. See you next year! Here's a flavour of today pic.twitter.com/EZAO2lEfiE

The summer school opened on Friday, September 3 with a "Shared Island Experience" hosted by the Department of An Taoiseach with Minister Darragh O’Brien, Sarah Creighton, Allison Morris, Dr. Robert Mauro, and Sorcha Eastwood making up a panel chaired by RTE’S Bryan Dobson. The panel heard news of the passing of Pat Hume and paid tribute to her as a truly remarkable woman who would be very much missed.

In 1963, President Kennedy visited Ireland from June 26 to June 29, including a visit to his family homestead in Dunganstown, Ireland. He’s pictured here addressing the crowd in New Ross, Ireland. #TBT #ThrowbackThursday pic.twitter.com/Ljh3AG0Xfi

Journalist Allison Morris said, “Young people, new communities and women have been identified as the under-represented voices in Northern Ireland and men have been the gatekeepers of many communities, which has kept funding from women there.” Sorcha Eastwood said: “when you have a situation where only seven percent of our children are schooled together that’s an issue.”

On Friday evening, the Kennedy Summer School was officially opened by CEO of Failte Ireland Paul Kelly who stated, “as a country, we will emerge from the pandemic well placed to make the most of the opportunity to build a more sustainable kind of tourism.”

Seamus Whelan, son of the late Noel Whelan, who was the founder of the Kennedy Summer School, stole the show as he introduced the inaugural Noel Whelan interview. “My Dad was very passionate about the summer school. His favorite part was when he got to interview someone one on one. Therefore it's very appropriate that an interview is being named after him.”

The inaugural Noel Whelan interview saw Virgin Media’s Zara King interview Professor Luke O’Neill. Professor O’Neill commented: “We’ve been through very difficult times with Covid, because of all the unknowns. He believes history will be kind to how Ireland handled the crisis. “We can all be very proud,” he said Mick Mulvaney, former U.S. envoy to Northern Ireland under the Trump administration, and Congressman Brendan Boyle discussed the polarization of U.S. politics.

Mulvaney commented: “Factual news is hard to come by. News is replaced by ‘opinion and reaffirmation’ and ‘opinion and outrage’ is more profitable than facts. There is no reason to believe the U.S. is alone in this.” The final event of Friday evening saw former taoiseach Bertie Ahern put the questions to journalist Tommie Gorman. "I saw our country take its place, fight for its place, participate.

They were really really immense times," said Gorman as he recalled his days reporting from Brussels as Europe Editor for RTE. Opening events on Saturday morning was the History Symposium with historians Dr. Margaret O'Callaghan of Queen’s University Belfast, Dr. Cormac Moore, Historian in Residence at Dublin City Council, Dr. Bill Kissane of the London School of Economics and Dr. Donnacha Ó Beacháin of Dublin City University discussing a range of seminal events in Irish and American history with moderator Dr. Mary C. Murphy of University College Cork. It was put to the panel "what lessons can be learned from Partition, 1921 – 2021?" Dr. Bill Kissane said of the de Valera approach of being one Nation One Ireland: “theoretically it worked, practically it failed.”

Donie O'Sullivan responded by saying that, for some, there was a "magic" at a Trump rally. Suzanne Lynch agreed that Trump is a communicator and some find him authentic. He legitimized ideas that others wouldn't express,” she said.

The Irish Politics session was an all-female lineup of representatives, including Verona Murphy, Neasa Hourigan, Jennifer Carroll McNeill, and Mairead Farrell with RTÉ’s political reporter Mary Regan as moderator. Asked if the first female taoiseach would be Mary Lou McDonald, Neasa Hourigan said, “the gender of the taoiseach won't break ceilings but a better gender balance among our politicians, in general, will help to solve equality issues.”

That afternoon, a panel of Ireland’s leading legal journalists took to the stage to discuss "Covering the Courts " while offering an insight into reporting on some of Ireland’s most fascinating legal cases that have gripped the nation in recent years. On Friday evening, the Kennedy Summer School was officially opened by CEO of Failte Ireland Paul Kelly who stated, “as a country, we will emerge from the pandemic well placed to make the most of the opportunity to build a more sustainable kind of tourism.”

The panel included Conor Gallagher, crime correspondent for The Irish Times, Frank Greaney the Communicorp courts correspondent, Orla O’Donnell, RTÉ’s legal affairs correspondent, and Vivienne Traynor, RTÉ’s court reporter with moderation from former Director General of the Law Society of Ireland Ken Murphy. Orla O’Donnell commented that “reporting on the courts has always been pressurized but now it's harder, as accurate info and detailed legal arguments have to be condensed into a tweet, as well as for radio and TV.”

The final event of the 2021 summer school saw Washington correspondent of The Irish Times Suzanne Lynch join RTE’s Washington correspondent Brian O’Donovan and Donie O’Sullivan of CNN as they discussed "Reporting on America in a Time of Tumult ." Together they offered an insight into their own first-hand experiences of covering the Trump and Biden administrations and the complex media landscape in the U.S.

The moderator was Larry Donnelly. Discussing Trump, Donnelly posed the question as to why Trump polarized opinion so much. Donie O'Sullivan responded by saying that, for some, there was a "magic" at a Trump rally. Suzanne Lynch agreed that Trump is a communicator and some find him authentic. He legitimized ideas that others wouldn't express,” she said.

Commenting on the summer school gathering, chair of the school Willie Keilthy said: “We are hugely proud to have delivered a very successful Kennedy Summer School. "Despite all of the restrictions we are delighted to have welcomed live audiences to St. Michael’s Theatre and to New Ross Library Park whilst also streaming all of the events for free.

"This year’s summer school was certainly different from usual, but it has been a great success with a huge interest in all of the online events from across the globe. We’re looking forward to in-person events looking a little more like normal in 2022, however we also see the value in reaching more people across the globe so we may retain some of the opportunity that blended events offer next year too.”