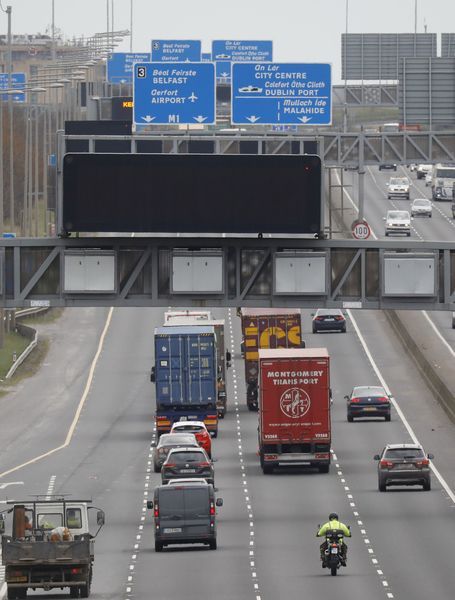 Ordinarily you might expect that figures showing a boom in trade with another economic entity would be a source of pride, and indeed pleasure, for a government minister whose portfolio covers the economy.

But this is not entirely the case when it comes to Northern Ireland's economy minister, Gordon Lyons, a member of the Democratic Unionist Party. As recently reported in these pages, Minister Lyons has been fretting over the fact that exports from Northern Ireland into the Republic have risen by 77 percent since Brexit.

Increased customs barriers between Britain and the Republic have also seen businesses in the South look to new markets in the North. Mr. Lyons, whose party is against the protocol, said that any “increase in sales to any new markets is positive.

In the years since the Good Friday Agreement the border has been less visible and increasingly less considered by people living on both sides of it who are eager to improve their economic circumstances, even despite of it. Ironically, this process has been accelerated by, of all things, Brexit, a move that was, it is important to remember, opposed by the majority of voters living north of the increasingly sidelined border.

However, he added that “Northern Ireland’s most important market both in volume and value” is Britain. “The protocol creates a barrier and is clearly diverting trade,” he said. Well, yes, it is diverting trade. But it is also raising it. We have to wonder that if Brexit had led to a boom in trade between the North and, say, Denmark, this would be a matter of such obvious concern for the minister.

But the boom is with the South, the greater part of the island of Ireland, and that entity that the DUP has so often described as a foreign place. It is not foreign of course; never has been; never will be. What we are witnessing as a result of Brexit is an affirmation of the essential unity of the island of Ireland, a natural unity of interlinked economic hinterlands that have been broken up as a result of an artificially conceived and created border.

In the years since the Good Friday Agreement the border has been less visible and increasingly less considered by people living on both sides of it who are eager to improve their economic circumstances, even despite of it. Ironically, this process has been accelerated by, of all things, Brexit, a move that was, it is important to remember, opposed by the majority of voters living north of the increasingly sidelined border.

So, and as Stephen Kelly, chief executive of Manufacturing NI, put it, what is surprising is the quantum of change that has taken place Says Kelly: "There’s basically nearly €800 million worth of additional sales of Northern Irish goods into [the Republic of] Ireland in the first six months of this year, which is enormous. “It proves that market access is as critical for trade as anything else and it also shows that the protocol does provide opportunities for Northern Irish producers.

The challenge we do have is that we won’t know the quantum of the disruption on trade from Britain into Northern Ireland for at least another year.” Ah, the protocol, a way around Brexit which, in the view of the DUP,  is adversely affecting the new way of doing business even though it was agreed to by the Brexit-steering British government, but is now being targeted for diminution by that same government.

And, of course, the pro-Brexit DUP. Again, for the record, as per the findings of the CSO, and as reported in various news outlets, the value of goods being imported from Northern Ireland to the Republic has jumped by 77 percent since the UK left the EU at the start of the year, while the value of exports from the South to the North has risen by 43 percent.

This is positive news. Ireland, all of it, is getting on with it. And yet the economy minister in part of it is fretting. It's a most peculiar situation for sure. But of course the border, a meandering line on the map that has been an economic hindrance for a hundred years, is a most peculiar thing too. Only now, post Brexit, less obviously so. And that, for some, is not a cause for celebration, but rather for concern.