Home Cork have it easy against Rockland 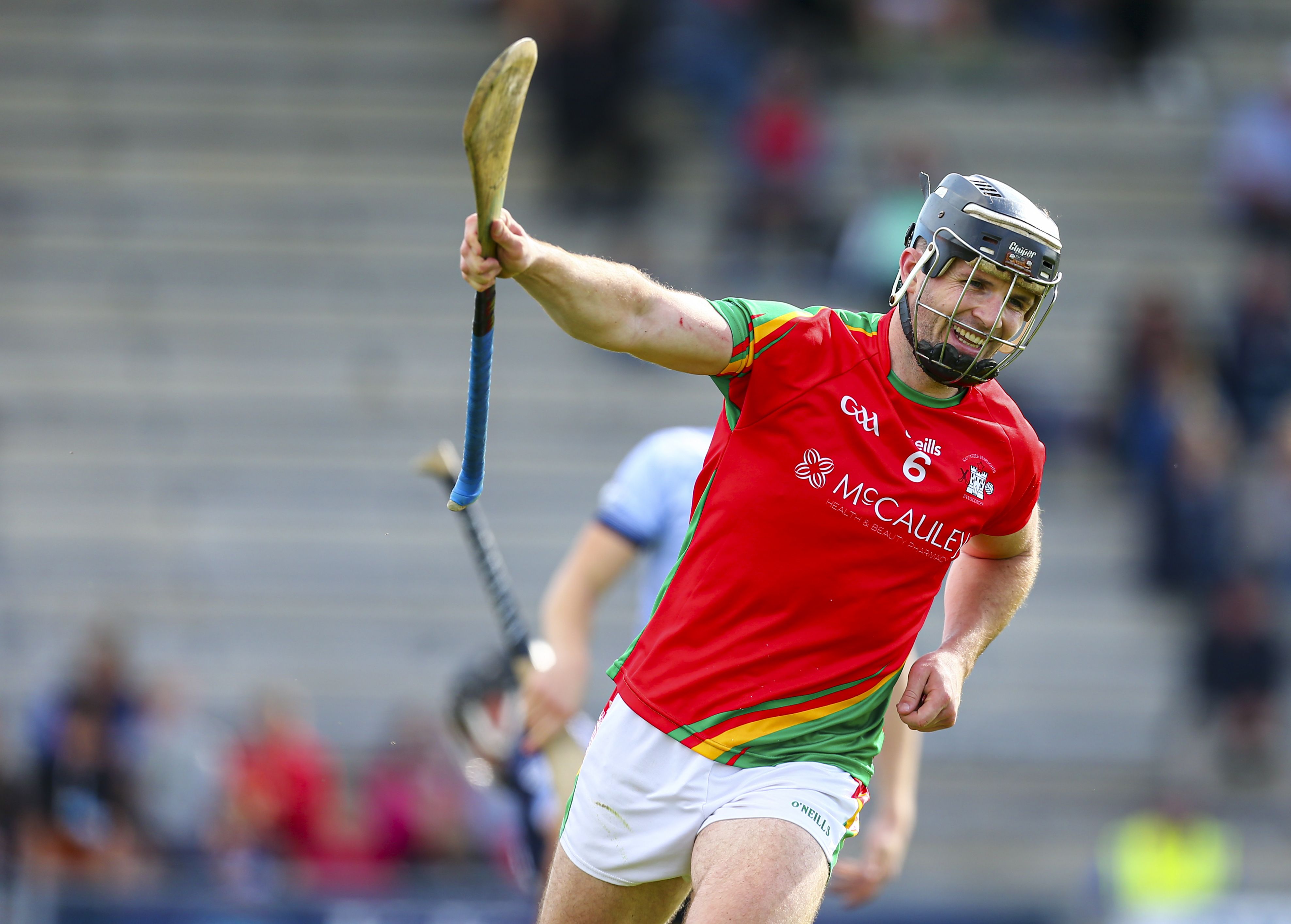 A well-seasoned and vastly experienced Cork squad had way too much firepower for a young and under-performing Rockland squad in the junior A semifinal.  The Rebels started smartly as Conal Ahern opened their account on their first attack. The wing forward would go on to have a stellar performance as he landed plenty of scores while also creating chances for his colleagues. Dara Walsh and Ger McCullagh chipped in with two more points before Brian Thornton landed a spectacular effort to get the Rockies motoring.

Two more minors followed from Brian Coughlin and Nick Lang, and we looked set to have a serious contest about to unfold. Well that expectation proved illusory as after the water break Cork showed who was boss as they confidently put 1-6 on the board while limiting their outplayed opponents to just two points before the intermission. Alan Raftery landed a brace as the industrious Conor Hunter seemed to be everywhere while Willie Whooley, Shawn McNamee and Conal Ahern added points. Just before the short whistle Ahern accentuated his considerable class with a great individualistic effort for a goal. Ruairi Molloy landed a fine effort from deep in defense and James McDonagh  closed out the scoring for the period to leave their team trailing by 1-9 to 0-5 at the break.

On resumption the Rebels continued to rule regally like voracious overlords. They put an almost uninterrupted 1-7 on the board as they seemed to be in overdrive or cruise control all over the field. They generated scores from turnovers, great support play and optimal shooting opportunities. Hunter, Ahern, Judge, Sheedy and company embellished their stats and Tom Joe Sullivan goaled as the lead ballooned to 2-17 to 0-5 with just about a quarter left. Then it seems something snapped in the collective psyche of the Rockies to indicate that we’re better than this walloping. That was perhaps the best score of the match, a brilliantly executed goal from Tadgh O’Riordan. Sure it was too little too late, but it was enough to rock the Rockies from their somnolent-like stroll against the raging Rebels and put a veneer of respectability on the hitherto embarrassing scoreboard.

Mike Vince and Brian Coughlin landed points before Rockland’s tenacious defender Ruairi Molloy goaled after a good pass from Vince. Though in the late stages of the game Cork were coughing up a few scores to a belatedly revitalized Rockland, they hadn’t exactly laid down their arms. Though they emptied their bench, veterans such as Paul O’Connor can still show young fellas how it’s done. He set up Ger McCullagh for a few points, while at the other end Tadgh O’Riordan was still firing over points as the game got to its foregone conclusion as Cork booked their spot in the New York Junior A final.

This was the final of the inaugural Novice Competition, and it definitely lived up to its billing. The sizeable crowd certainly got good value for their money. Though the pundits might bemoan the finesse elements, the game garnered plenty of plaudits for the passion with which it was played. The law of unintended consequences seemed to be operative quite often as well, and of course there were plenty of talking points. Referee Brian Quinn was a busy man, naturally laying down the law, and of course explaining the rules in his unvarnished/uncomplicated Quinnesque interpretation when questioned or challenged. It’s axiomatic at this stage that goals win games and Manhattan Gaels seemed to have learned that lesson very well, as you see they had more goals than points, indeed quite unusual for an adult match.

Meanwhile Manhattan’s robust road to victory was built around the fortress like defense with big goalkeeper Ger Shivnan coupled with flying bodies and flaying limbs preventing Hibernians’ nearly relentless attack from breaching their goal line. Up front the maurauding Eoin Kelly manfully maneuvered the attaching division. Of course unquestionably Sean Brady was a shoe-in for the super-sub accolade, what more could he do, come off the bench and score two goals in two minutes.  Meanwhile Hibernians started well and were unlucky not to goal as limbs and posts came to the rescue before Tom O’Brien pointed a free and then landed a fine effort from the wing. Indeed O’Brien’s accuracy from placed balls kept his team very much in the hunt. When play switched to the other end Eoin Kelly scythed his way through a phalanx of players to get the best score of the game. The lead was increased after Sean O’Seanain rode a cascade of robust tackles to land a fine score.

After hydration there were concerns that the referee might suffer writer’s cramp as he was busy interviewing a few players. No need to worry the ref has good digital dexterity. Tom O’Brien and Darren Lynch exchanged points before the game-changer and goal-scorer Sean Brady arrived, great deliveries from Jack Kiernan set the scene for Brady’s major strikes. Another O’Brien point left his team trailing by 0-4 to 3-2 at the short whistle. Upon resumption Hibs narrowed the gap with two well-worked points for their best player O’Brien but Declan Cole pointed at the other end before another nightmarish long ball was ushered to the net by Conor King. Manhattan looked to be nearly safely over the line as Cathal Dempsey seemed to get the last touch on a ball that went hither and tither before falling over the goal line. However Hibernians rallied for the last quarter as the recycling of subs seemed to cause confusion and consternation.  They breached the hitherto unbreachable fortress of Shivnan and company as Andrew Keane goaled and then followed up with a point. Late goal-bound efforts were resolutely repelled and deflected as Manhattan Gaels held on to a hard-earned but well-deserved victory.

On Saturday, at the Rockland GAA Center of Excellence, the 20th anniversary of the horrific events of September 11th were poignantly and decorously commemorated. Well done to the NYPD, the FDNY and the Rockland GAA for meticulously organizing and hosting this memorable event. Those who perished on September 11th and its aftermath, and especially the four members of the New York GAA, namely Dennis McHugh(Rockland), Damien Meehan(Donegal), Kieran Gorman(Sligo) and Brendan Dolan(Rangers) were fittingly remembered.

The weather was splendid and the massive crowd was treated to a great battle between the Gaelic footballers from the FDNY and the NYPD, with the cops getting the decision with a couple of points to spare There were some great scores, timely tackles, full-bodied challenges and one wag claimed that the NYPD had an advantage in taking down their fleeing opponents. He opined that it must be  their training, though in fairness the referee was always right up with the play to see that everything was well within the scope of the rule book. In this sporting game disciplinary cards, were just an unnecessary appendage.

Meanwhile the pattern of play was very similar to that big game in Croke Park a week earlier. At Croker the winners got great goals and wonderful input from the bench, while the losers failed to capitalize on their scoring opportunities. In Rockland the cops got two smashing goals, while my neighbor came off the bench to score two crucial points. As for the firemen, they spurned a few scoring opportunities, prompting one pseudo analyst in the stands as he quaffed copious amount of his favorite brew to state “perhaps the firemen had too much western blood in their veins”.

There’s never any scarcity of armchair generals, or in this instance well-satiated bleacher generals.  Meanwhile as the game was about to end, two players, one from each side got into a little difficulty, with each other. Well it was absolutely astonishing, the speed at which the respective team mates and benches responded to their colleagues’ difficulties. They got to their downed colleagues with almost Olympian caliber speed. Fast, first or even furious responses would appear to be deeply embedded in their DNA as evidenced in this tempest. As they say in amorous affairs true love never runs smoothly, and perhaps that’s the case with the NYPD and FDNY when it comes to football. Can’t wait until next year’s game, and if it’s half as good as this year’s, it should be another packed house. Congrats to both teams and all involved in staging and showcasing this wonderful event, let’s never forget those brave souls we lost twenty years ago, and may they continue to rest in peace.