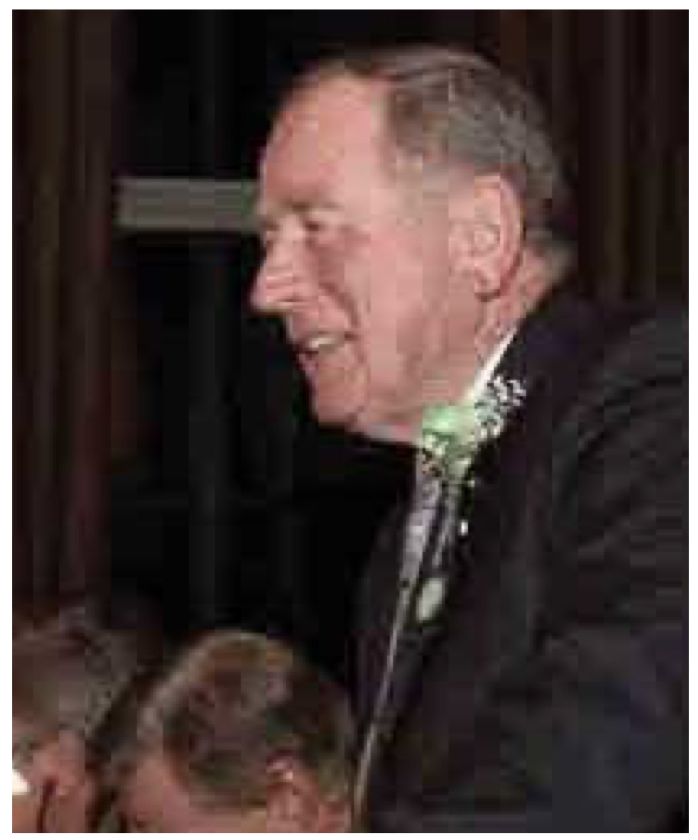 John Dunleavy during his parade chairmanship.

It's been six years since John Dunleavy chaired the committee that runs the New York St. Patrick's Day Parade.

It seems more like six hundred years since Mr. Dunleavy, after being ousted from his chairmanship, took legal action against his former vice chairman, Dr. John Lahey, in Bronx Superior Court.

That court has now delivered a ruling which orders depositions in the case.

In a ruling just handed down the court stated: "Plaintiff's motion for an order di-recting depositions of defendants be conducted forthwith is granted, and it is ORDERED that the depositions of defendants John J. Lahey and Francis X. Comerford be completed within 60 days from the date of entry of this Order. Plaintiff shall serve a copy of this Order with Notice of Entry upon defendants forthwith. The Clerk is directed to enter Judgment."

The action taken by Mr. Dunleavy is not purely based upon his loss of the parade committee chairmanship, but more on allegations that he played fast and loose with parade finances, something he has vehemently denied.

The tumultuous changes in the parade’s governing structure back in 2015 resulted in legal action, suit and counter suit, in the Bronx courts.

John Dunleavy continued over the years with his court action while being represented by his attorney, Frank Young.

Along the way, and critically for Dunleavy, there was a verdict of sorts.

Not from a court bench, but by way of a decision. In March 2016, the office of the New York State Attorney General decided not to take any action against the former parade chairman.

Mr. Dunleavy said at the time that he felt thoroughly vindicated by the decision not to pursue allegations of financial impropriety against him, allegations that Dunleavy and his attorney stated were sourced in the parade board.

The Attorney General’s office had been in receipt of a letter from the parade board in November, 2015, pointing to expenditure of roughly $24,000 in questionable credit card charges over three years for trips that didn’t seem connected to the parade’s business or core-mission.

The letter had followed an internal audit of parade finances and was followed by board representatives publicly making the point that new and stricter legal regulations for non-profits required the parade’s busi- ness to be conducted by the book.

“Dunleavy was accused of spending company money for personal items, but the attorney general dismissed the allegations,” the Daily News reported at that time.

After the allegations became public, Mr. Dunleavy, while defending the expenditures, also offered to repay the parade for any spending ultimately deemed to be un-justified. That the parade’s affairs were to be conducted by the book was an assertion that Mr. Dunleavy clearly took to heart because he asked to see the book, or rather the books.

At a parade board meeting in the first week of September, 2019, Dunleavy, in attendance by virtue of his continued membership of the board, asked that the board to be given access to “audited financial statements” pertaining to the parade.

This was not forthcoming and, according to Mr. Dunleavy, he was refused access in part due to the fact that he was still in litigation against the board.

There was then, Dunleavy stated in a sub-sequent email sent to “the members of the St. Patrick's Day Parade, Inc.,” and seen by the Echo, a motion presented to the meeting that would have resulted in his expulsion from the board.

Suffice it to say, things were getting hot under collars, and Mr. Dunleavy, never the backing down type, was feeling hot enough to, as he stated in the email, “compelled under duress to abruptly resign from the Parade Board.”

This was, according to Dunleavy, in response to a motion of expulsion directed at him.

Dunleavy, in a later email, wrote that his immediate reaction was an emotional response to the expulsion move. Emotional or not, his resignation was not rejected by the board and thus appeared to have immediate effect.

Dunleavy stated that his obligation as a director “was to resign because I wanted to protect my dignity as a person and my integrity as a Director and chose to re-sign rather than be expelled for simply fulfilling my fiduciary duties as a Director.”

In the email he continued: “My reaction to resign reflects the emotional and psychological toll the constant grind of these past four years have taken upon me. “To be falsely and publicly accused by certain members of the Parade Board of misappropriating Parade funds on several trips to Washington, D.C. have inflicted severe emotional distress upon my family and me. They falsely claimed that these trips have no indication of being related to company business let alone that they had prior approval by the Corporation.

“As I have recently submitted to the Court, these trips were taken on behalf of the Parade in response to invitations we received from the Military District of Washington to strengthen our relationship with the military.

The email was penned in the cold light of day after the previous evening’s board meeting and contretemps over the parade’s finances.

“Also it should be noted that the law requires prior notice to an individual who is going to be made the subject of a motion to terminate his board position. Because no such notice was ever given, any termina- tion or purported resignation of that member is a nullity.”

That assertion, like so much of the parade’s affairs in recent years, would be open to interpretation and argument.

But there's no argument against the ruling that has now descended from a Bronx bench.