Home Accordionist Keane is a fine writer, too 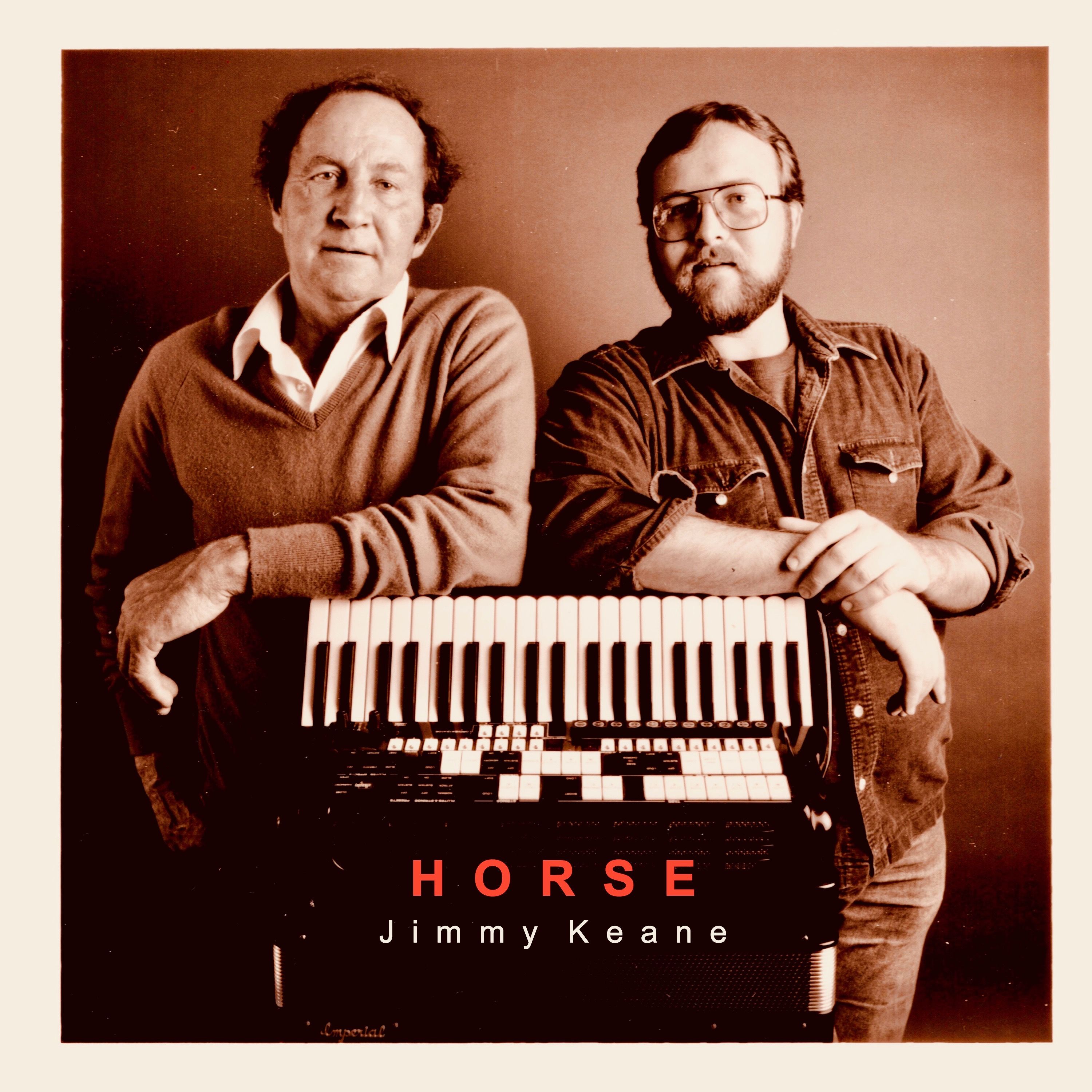 Accordionist Keane is a fine writer, too

“Horse” is the new project from the great Chicago accordionist Jimmy Keane.  A collection of recordings chronicling Keane’s musical experience 1968 to 2019, it was conceived as a response to the pandemic, a time in which Keane, like many musicians, lost gigs.  What he was able to do with this project is breathtaking: a bold, magisterial work that honors his family and friends, all the while telling his own story.  It’s a project that speaks as significantly to the “tradition” in traditional music as it does to the musical life of the individual behind it.

The presentation is noteworthy, as it’s disguised as an old-fashioned cassette.  There are two photos of Jimmy and his father on the J-card, one in which he’s a toddler (inside) and one as an adult (outside), both looking happy out.  The album itself, which includes 192 MP3s, a PDF file of liner notes, and a JPG of album art – is contained on a thumb drive that swings out of the cassette itself.  In the world of Irish music, it’s a very unusual approach, but one I would love to see more artists explore, as it allows for great creativity. Plug it into your computer’s USB drive, and you’re ready to start rolling, unconstrained by the limitations of a CD or LP…or cassette, even.

The collection starts, really, with Keane’s 271-page liner notes PDF.  In size, scope, and quality, the only thing I can compare this to is “A Few Tunes of Good Music,” the 1,014-page PDF that accompanied Reg Hall’s 2016 collections “It Was Mighty!” and “It Was Great Altogether!”  Both tell a story of place – Hall of London and Keane of Chicago – but while Hall’s approach is objective and that of an academic historian (his work is structured around “social systems” as an analytic area, and is lavishly footnoted and full of citations), Keane’s is entirely subjective and reads like a memoir.  It is a deeply personal narrative filled with humor of all sorts, sometimes self deprecatory, sometimes teasing, sometimes clowning, but always, always engaging.

Turns out, Keane is a great writer.  If you’ve met him, you’ll immediately recognize his personality in his approach, but really, he tells a good story.  The things he says about his music, about his friends, and about his parents are full of love, reverence, and friendship and make these notes engaging and very often moving.  They paint an incredible picture of how someone starts in the music, develops around it, and perseveres over time.

I’m particularly drawn to how he writes of his father, Jimmy “Horse” Keane.  As listeners will hear, the Horse was a magnificent sean-nós singer and he stands as a legendary character to musicians young and old.  But here, we have continual, touching remembrances of a son, proud of his father.  It’s especially apparent in the photos included in the PDF, which are lovely and shed more light on Keane’s life.

The really remarkable thing about these notes is the way Keane reveals truths about traditional music and how he’s able to connect them to the recordings themselves.  Sometimes this is through how things sound.  For example, there’s a track from 1973 of Keane playing “Kit O’Mahony’s" in his kitchen.  It is, in a very visceral sense, the sound of home.  You have the sound of the accordion in the Keane family kitchen, a sound environment that would be personal in the first place.  But in the background, you have the vague sound of Keane’s mother Mary – “The Kerrywoman” – speaking.  This is the sound of music and life happening for real, and something a listener can relate to. But when Keane writes the kitchen was “where my Mom told me that if I ever got nervous when playing in public […] to just close my eyes and pretend I was sitting” it makes an intimate, powerful – but again, relatable – statement about what this music means.

Sometimes these truths lie how things happen.  Like when we learn how Keane’s first reel “The Charleston” got named.  Or where we learn a tune came out of Comhaltas Ceoltóirí Éireann’s magazine “Treoir,” and find out he learned it with Liz Carroll and Marty Fahey because it was the “Tiger Beat” for Irish music nerds in the early 1970s.  Or the track “As I write The Rath Cairn Reel” from 1974, on which we hear a young Keane actually composing a tune.  It’s a working track, not one intended for posterity, but that it’s here and demonstrates process says so much about the journey.  There are several recordings from various fleadhanna over the years (many with Liz Carroll), complete with crowd noise, chatter, and various whisperings.  (The effect is not unlike the cash registers you hear on live session albums.)  Occasionally, things come together in haphazard ways, but sure – doesn’t it happen that way all the time?

The truths here also grow out of who Keane learned from and made music with over the years.  The music with Carroll and Fahey inspires.  I love the tracks that include Mick Moloney and Robbie O’Connell, because they add so much to how one hears their studio albums.  It’s fascinating to hear the original, unedited version of the bohola track “When The Cock Crows It Is Day …” and the 17 (!) minute live version of “Doherty's March / …,” a favorite bohola track of mine.  It’s an incredible performance and reminds me of how utterly taken I was with the band when I saw them at NYU’s Glucksman Ireland House, back when concerts still happened.  And hearing Keane talk about the likes of Kevin Henry, Johnny McGreevy, Cuz Teahan, Eleanor Neary, Joe Burke, Joe Cooley, and others, it gives definition to these names, even, I would imagine, for the people who knew them by passing on small bits of knowledge that seem insignificant, but in context have incredible relevancy.

The bottom line is this: I don’t know how traditional musicians can afford to not have “Horse.”  There’s so much music here to draw from and be inspired by, but it’s also a major story about Irish America.  Anyone who has been a fan of Keane’s music or of the groups he’s been a part of will find this album fulfilling.  If you’ve ever competed in a fleadh or been to an All-Ireland, you will relate to this album.  If you’re from Ireland and hear home in this music, you will relate to this album.  It’s importance is on a Gradam/Grammy/Smithsonian-type of level and really should not be missed or overlooked.  An artistic statement and an instant classic, this is one musicians and all will be talking about for years.  Highly, highly recommended.  To learn more, visit jimmykeane.com.

Errata: in last week’s column, I made the nearly unforgivable error of misreporting the name of the Murphy Beds album “Easy Way Down.”  Several readers noticed this and reached out before I was aware of my mistake.  Corrections were rendered, apologies made, and if you are looking for the Beds new album – which I will reiterate here is great – you’ll want to go to www.murphybedsmusic.com to find it.