Home O’Brien colt is too late in Saratoga 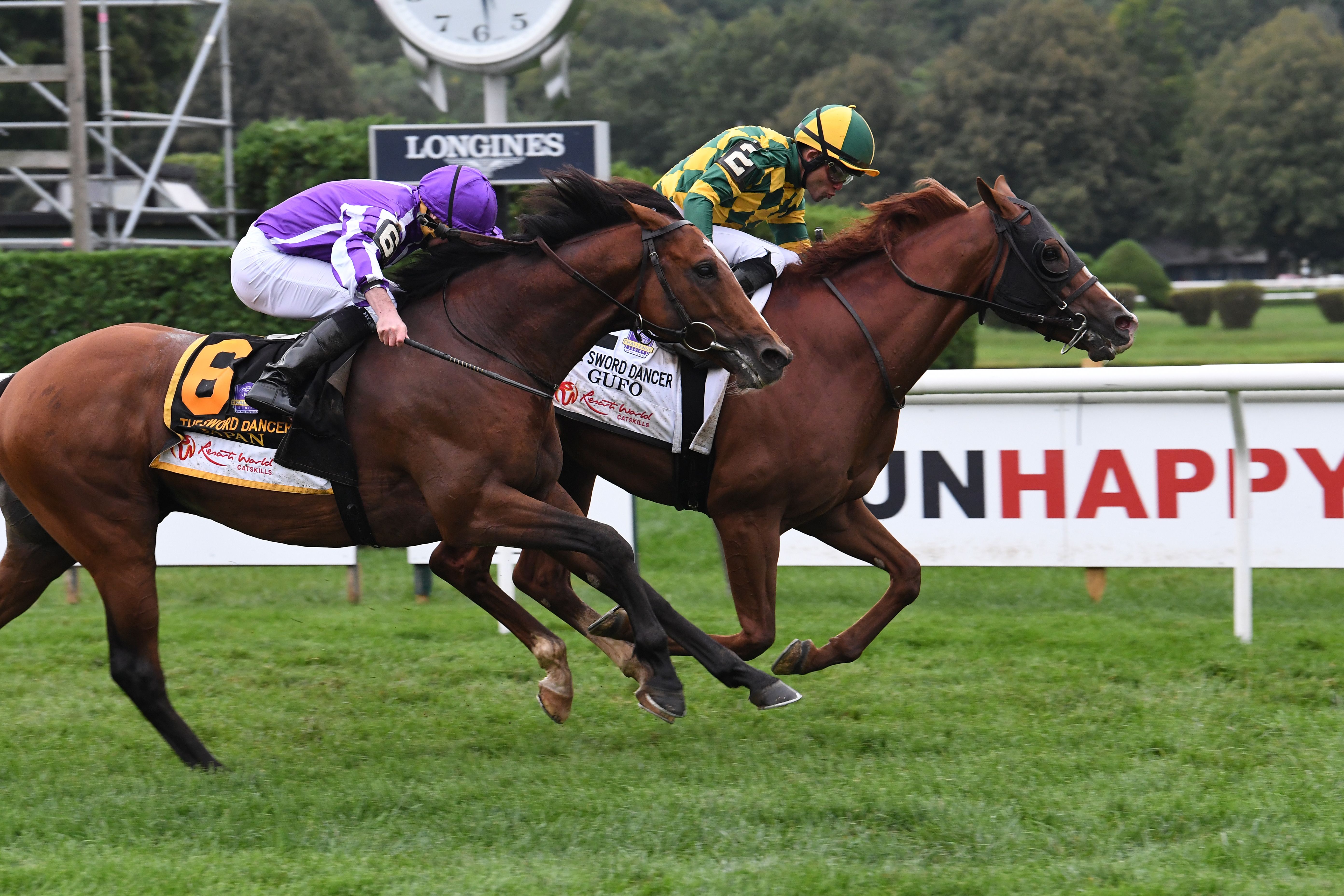 Japan and Ryan Moore fail to catch Gufo and Joel Rosario in the Sword Dancer Stakes at Saratoga. ADAM COGLIANESE

O’Brien colt is too late in Saratoga

Trips and raceriding made all the difference in Saturday’s Sword Dancer Stakes at Saratoga. Aidan O’Brien gave this Grade 1 grass feature at 12 furlongs a crack with Japan, a 5-year-old Coolmore horse that had won a couple Group 3 races this year. The race was for all intents and purposes won in midstretch by Gufo, when jockey Joel Rosario took away a lane that Ryan Moore was aiming for with Japan.

Moore then had to guide Japan outside while Gufo stole away by a couple lengths. Japan kicked in when he had clear sailing but by then the wire was coming up and Gufo was home free. Japan, a neck behind Gufo at the wire, settled for place money.

“He ran very well today,” Moore said. “I was pleased with it.”

Later on the program, Godolphin Racing’s Essential Quality likely clinched 3-year-old honors for 2021 with his gutsy victory in the Travers. The colt is another feather in the cap of Niall Brennan, who got him race ready at his farm in Ocala, Florida.

Saul McHugh cracked with first-time starter Twisted Path in Woodbine’s first race on Saturday. The 3-year-old filly, racing for breeders Robyn Broham and Maureen Hewitt-Topp, settled nicely under Isabelle Wenc in this maiden claiming route at the $7,500 tier on the main track, applied pressure to the leaders entering the stretch, took the lead a furlong from home and drew off to score by three lengths. The filly paid $22.10 to win.

Andrew McKeever sent out one of only two 2-year-olds not administered with Lasix for last Monday’s ninth race at Indiana Grand but Brit’s Wit, which he trains for Iroquois Racing Club II, was ushered into the winner’s circle after rallying under Jermaine Bridgmohan to score by just over a length at first asking. Brit’s Wit paid $31.60 in this maiden special weight event on the grass that covered seven and one-half furlongs.

The wire came at just the right moment for Tom Campbell’s North Elkhorn in Belterra’s eighth and final race last Wednesday. Julie Burke had the 7-year-old gelding on the lead throughout this five-furlong dash on the main track but a rival drew alongside and the camera was needed to determine the winner. North Elkhorn, which has been in Jimmy Corrigan’s barn for the last two and one-half years, paid $3.00 as the heavy favorite in this claiming sprint at the $7,500 plateau.