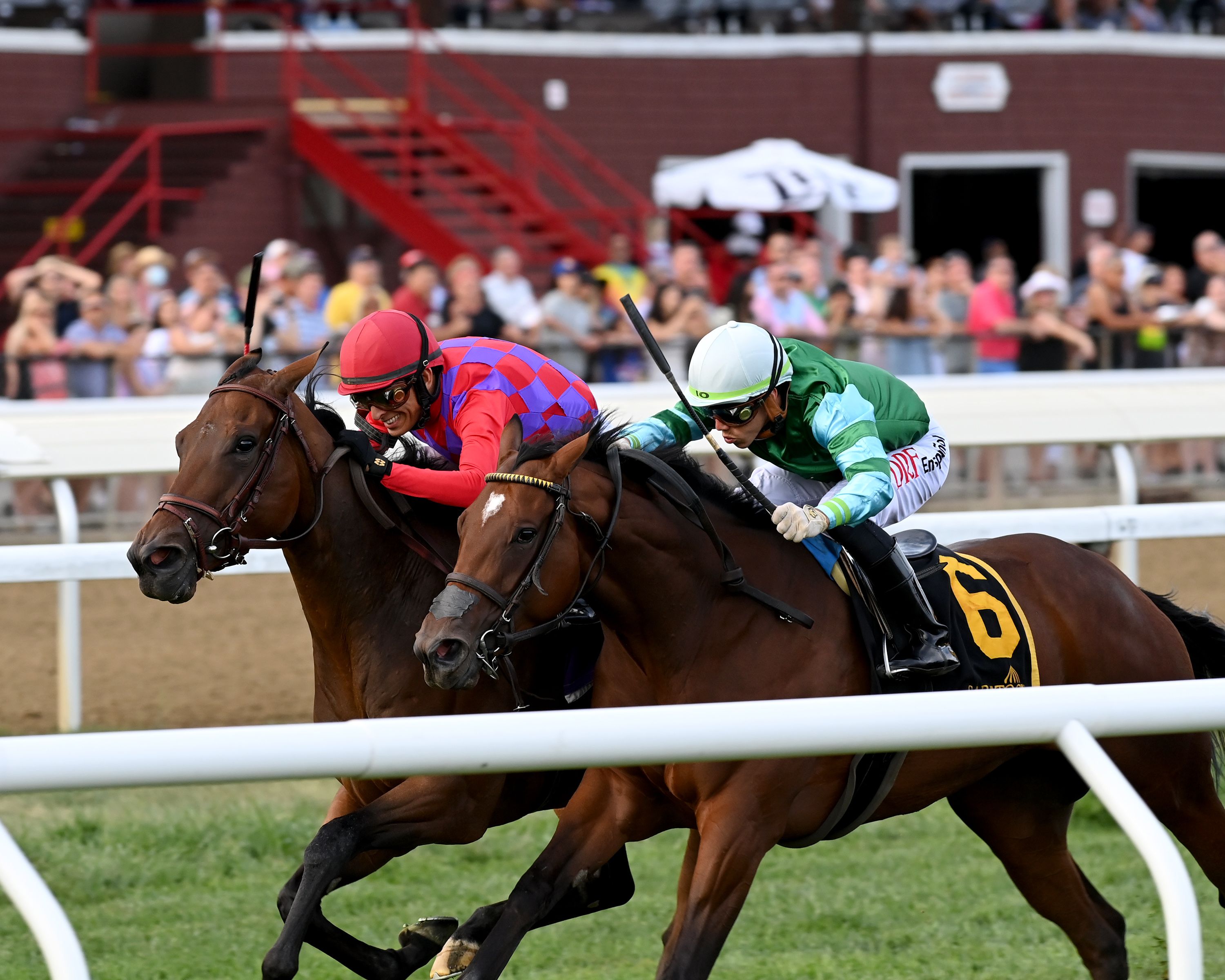 Star Devine, on the outside with John Velazquez up, collars Illegal Smile, Irad Ortiz, Jr. riding, to win the Galway Stakes at Saratoga. CHELSEA DURAND

The prospects for Arlington’s future beyond the current racing season are pretty dim by all reports but if the lights are turned out for good, at least the Irish gave the plant something to remember on Saturday. Aidan O’Brien, Eddie Kenneally and James Graham each had a Grade 1 victory to call their own, while the other graded stakes race went to an Irish-bred.

Graham stole the show, riding longshot Two Emmys to a narrow victory in the Mr. D Stakes, formerly known as the Arlington Million until the purse was chopped by 40 percent. Quick out of the gate, the Dubliner and the 5-year-old gelding (eligible at the time for a nonwinners of three “other than” allowance race) led the field on a merry chase in this 10-furlong grass feature. Their three-length lead entering the stretch held late as they were a neck the best with 2-5 choice Domestic Spending closing fast. Two Emmys, trained by Hugh Robertson, paid $56.20 to win.

Among the vanquished were Space Traveller, the fourth finisher, racing for the first time for Brendan Walsh, and Armory, an O’Brien trainee, which came in sixth as the 3-1 second choice.

O’Brien had his moment in the spotlight in the Beverly D, when Coolmore’s Santa Barbara powered away to a three-length victory under Ryan Moore. They sat a little over a length off the early pace, gained momentum around the far turn, took the lead in midstretch and drew off. Santa Barbara, which has come to hand this summer for O’Brien, paid $4.00 to win as the favorite. She previously won the Belmont Oaks in July.

Kenneally, in the midst of a very quiet 2021, got a boost from Homewrecker Racing’s Point Me By in the Bruce D Stakes, run at a mile over the lawn. Luis Saez settled the 3-year-old colt in midpack early, made his move straightening for home and then withstood some rough stuff from a rival to clear away by almost three lengths. Point Me By, making only his third career start (he won his racing debut less than two months ago), returned $5.40 to win.

The day’s other graded stakes, the Grade 3 Pucker Up, went to Shantisara, an Irish-bred 3-year-old filly. Ridden by Flavien Prat, she rallied around the far turn, took the lead heading for home and reached the wire in front by three lengths. A Chad Brown trainee, Shantisara paid $5.60 to win. She was bred in Ireland by Oliver Donlon.

The Galway Stakes, Sunday’s feature race at Saratoga, is named not for the Irish county but rather the town of the same name in Saratoga County. Apparently, Irish-breds Star Devine and Illegal Smile did not get the memo because they ran as if their homeland was at stake, finishing one-two in a three-horse blanket finish.

The duo raced in close proximity of each other throughout this turf sprint for 3-year-old fillies, first in midpack early on and then down the stretch. The wily veteran, John Velazquez, outgunned the young sharpshooter, Irad Ortiz, Jr., here, as the former teamed up with another Irish-bred to show that he still has a few bullets left in his holster. Last week, it was the Saratoga Derby with State of Rest.

Star Devine, owned by Lawrence Goichman and trained by Jorge Abreu, paid $17.00 to win in just her fourth career start and keyed a $131.00 exacta with Illegal Smile.

Another week, another stakes victory for Brendan Walsh. The event this time was the Van Clief Stakes at Colonial Downs last Monday and the runner was Princess Theorem, a 3-year-old filly owned by Dewberry Thoroughbreds. She was facing her elders here but was more than up to the task, digging down inside the eighth pole to win by almost two lengths. Joe Rocco, Jr. rode the filly, which paid $17.80 to win. Coming into the race, she had but a maiden victory, notched nearly 10 months ago, from five starts.

John Fennessy got his first training victory of 2021 at Presque Isle Downs last Tuesday when Clair Walker’s Lynbrooke, a 4-year-old filly, broke her maiden against claiming stock at the $7,500 level by three and one-half lengths. Rick Knott had the seat on Lynbrooke, which was introduced to Lasix for the first time here in career start number six. She paid $6.60 to win as the second choice.