Home Republic plod on against all odds 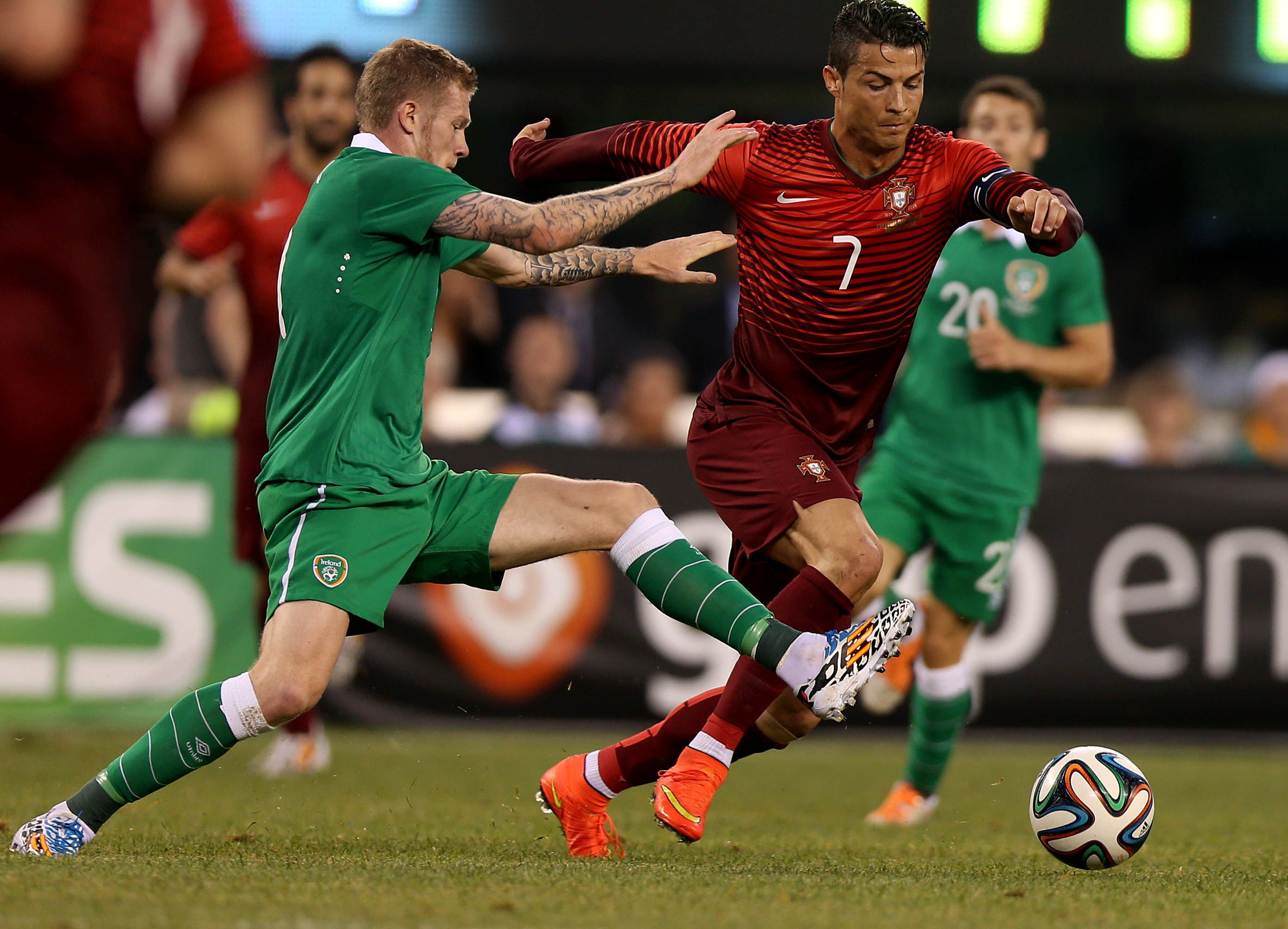 Ireland's James McClean challenging Cristiano Ronaldo of Portugal during the June 2014 friendly played at the MetLife Stadium, New Jersey in June 2014. Portugal won the game 5-1. They countries face each other this evening in a World Cup qualifying game. INPHO/DONALL FARMER

Republic plod on against all odds

Our seemingly doomed World Cup campaign resumes this evening when we play Portugal in the Stadio Algarve. I say doomed as we lost our first two qualifying games last June, 3-2 away to Serbia and 1-0 at home to Luxembourg. On the same night as we lost to Luxembourg, Portugal drew 2-2 away to Serbia, but really the Portuguese should have won as Ronaldo was denied a late winner. The ball was clearly over the goal-line, but VAR is not used for qualifying games. Ronaldo has scored 109 goals for his country, but has yet to get one against the Republic. However, we haven’t met many times in recent years. Our last meeting was in a friendly at the MetLife Stadium, New Jersey, when Portugal won 5-1. Ronaldo, who was coming back from injury, played that night, and he set up one of striker Hugo Almeida’s two goals and hit the post with a first-half free-kick.

In our penultimate meeting, at Lansdowne Road back in February 2005 when Brian Kerr was manager, we won a friendly 1-0 with Andy O’Brien getting the winner. Ronaldo also started that night and Damien Duff was booked for a foul on the Portuguese star, who was substituted after 70 minutes. So maybe our defence can hold Ronaldo, but the 36-year-old does have a reputation for coming up with match-winning goals. (See more on Ronaldo and his transfer last week to England.) Then on Saturday Azerbaijan visit the Aviva and on Tuesday next Serbia are due at the Ballsbridge venue. We should certainly know what hopes Stephen Kenny’s team have of reaching the World Cup finals in Qatar in 2022 in seven days’ time.

Stephen Kenny has been unlucky with injuries since replacing interim boss Mick McCarthy as Irish senior manager in April of last year. Last week prior to announcing his 25-man squad Kenny knew that Enda Stevens, Callum O’Dowda, Jason Knight and  Chiedozie Ogbene were all ruled out through injury while West Bromwich Albion striker Callum Robinson tested positive for Covid-19  and was isolating. Apart from 34-year-old Shane Long Kenny has gone for youth once again. But there is no place for another 34-year-old, long-serving goalkeeper Darren Randolph, as Kenny has opted for three young keepers: Liverpool’s Caoimhin Kelleher, Gavin Bazunu, who is on loan to Portsmouth from Manchester City, and Bournemouth’s Mark Travers. Randolph had been first choice ‘keeper since replacing Shay Given in 2015, but a hip injury saw the Bray-born goalkeeper miss a lot of action last season. James McCarthy, who recently joined Celtic and Robbie Brady, currently without a club after leaving Burnley, are also omitted. There is speculation that Brady, currently back in Ireland getting treatment for his Achilles problem, could also be joining Celtic. Burnley defender Nathan Collins receives his first call-up to the senior squad while Jamie McGrath (St Mirren) Andrew Omobamidele (Norwich) keep their places after impressing in the summer friendlies against Andorra and Hungary. Brighton’s Galway-born striker Aaron Connolly and Newcastle midfielder Jeff Hendrick return to the squad having missed the summer international friendlies.

Captain Steven Davis and vice-captain Jonny Evans are among eight players recalled to the Northern Ireland squad as manager Ian Baraclough opts for experience for their World Cup qualifiers. Northern Ireland travel to Lithuania tomorrow, followed by a home game against Switzerland on Sept. 8. There is also a friendly against Estonia in Tallinn scheduled between the two World Cup qualifiers. This is a much-changed squad from the one that beat Malta and narrowly lost to Ukraine in June. Rangers midfielder Davis, Northern Ireland’s most capped player with 126 caps, is back among the 25-man group along with Leicester defender Evans, despite his club boss Brendan Rodgers saying last week that the 33-year-old was not close to returning from a foot injury. Dundee United goalkeeper Trevor Carson, Hearts defender Michael Smith and Newcastle left-back Jamal Lewis are also back in the fold, along with Sunderland midfielder Corry Evans and Charlton striker Conor Washington.

Steven Davis, left, and Jonny Evans have been recalled to the Northern Ireland squad.
INPHO/PRESSEYE/WILLIAM CHERRY