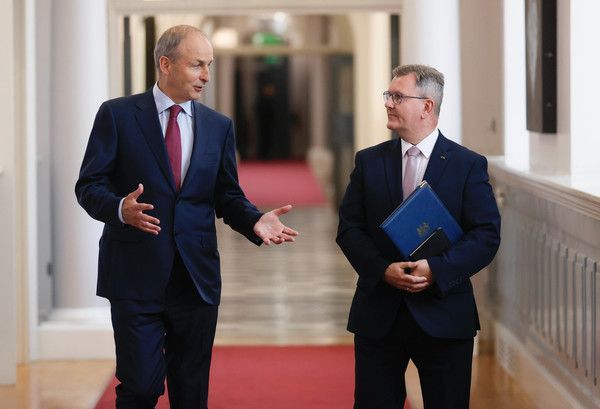 Taoiseach Micheál Martin has said that the EU is “ready to respond” to issues around the Northern Ireland protocol.

Mr. Martin was speaking after a meeting with DUP leader Jeffrey Donaldson in Dublin. It was their first meeting since Mr. Donaldson took over from Edwin Poots back in June after his 21 day tenure in the job.

Before the meeting, Mr. Donaldson warned the Irish government over its support for the protocol which sees Northern Ireland - despite its leaving the European Union as part of Brexit - remain in the EU single market for goods, with customs checks taking place at Northern Ireland ports on goods arriving from Britain.

Speaking after the two men met, Mr. Martin said: “We had a very honest, open discussion – solution driven. I acknowledge that the concerns of the unionist community are sincere, but we did indicate as well the mechanisms are there within the EU-UK trade agreement to resolve these issues, and issues around the protocol and our sense has been that the EU Commission has been consistently flexible and ready to respond.”

Jeffrey Donaldson said Northern Ireland’s relations with the rest of the UK were “being harmed” on a daily basis by this protocol and the Irish Sea border.

“That is simply not a sustainable position, and it is entirely consistent with the Belfast Agreement which says that the three sets of relationships are interdependent, are interlocking.

It’s was a busy week for the taoiseach. He welcomed French President Emmanuel Macron to Dublin where the situation in Afghanistan, Covid, climate change and the challenges facing the European Union dominated discussions.

Mr Martin said that because of Brexit, France was now Ireland’s nearest neighbor in the EU.

“The EU has demonstrated commitment, patience and creativity in its work to implement the Withdrawal Agreement and the protocol,” the taoiseach said in welcoming President Macron to Ireland.

“With the right political will, I believe that it will be possible to find sensible solutions to some of the outstanding issues, within the framework of the protocol.

“Both the President and I strongly support the EU team and the positive approach it is taking in seeking to advance this work.”

President Macron said France will back Ireland when it comes to Brexit.

“It (Brexit) is an existential issue for the solidarity and unity of the European Union. So, we will make sure that the agreements signed after very lengthy negotiations will be compiled with when it comes to fisheries or some well-known protocols. So, to put it bluntly, we will never let you down.”