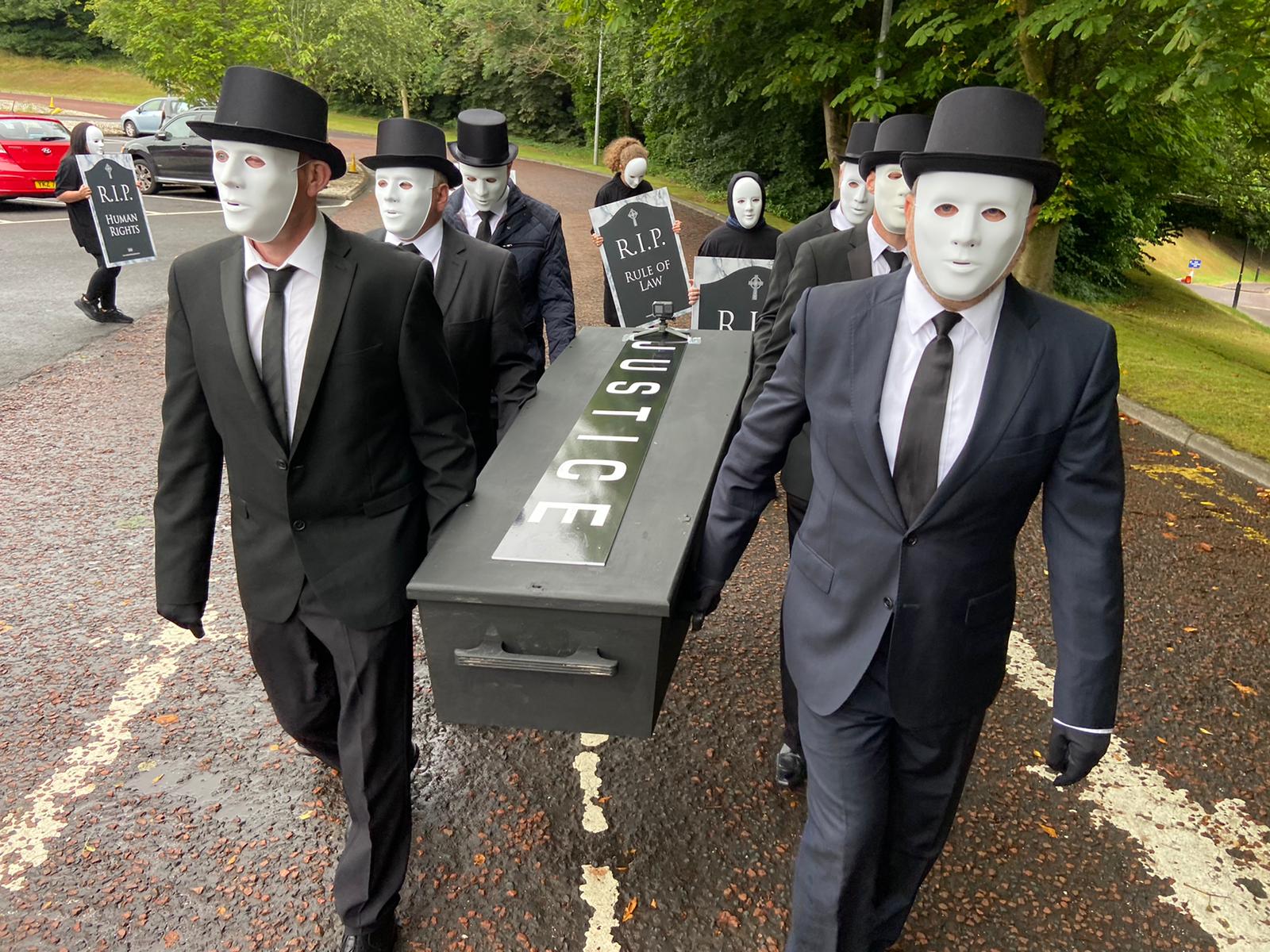 (A mock funeral for "justice" was held in Belfast)

Families who lost loved ones during the Troubles have held a requiem procession in Belfast where they symbolically laid the "remains of victims' justice" at the door of the Northern Ireland Office.

It comes after the British Secretary of State Brandon Lewis outlined plans to introduce a statute of limitations on all conflict-related killings and crimes prior to 1998.

Relatives for Justice CEO Mark Thompson said that the British government's plan poses a threat to the Good Friday Agreement and the political institutions.

"The Good Friday Agreement is predicated on the foundations on the European Convention on Human Rights, and the 1998 Human Rights Act, which incorporated that convention into domestic law," he said,

"That provided families – after decades of conflict where there was no justice, accountability, or proper scrutiny – with agency and the space to use the law, free from fear and intimidation and where witnesses and evidence can come forward.

"Victims have rights. Victims aren't helpless, hopeless people that society have to help. Victims are citizens who, under the Good Friday Agreement and European Convention, have rights, and those rights have to be honored by the British government.

"The British government and the PSNI have been at the vanguard of a battle in the courts, with the NIO and the British military, fighting families tooth and nail for the past decade and more, preventing discovery of material and documents relating to their loved ones, and pulling the resources from the Police Ombudsman to hamper investigations."

The proposals have faced widespread opposition from victims, human rights organizations, a majority of the main political parties, the Irish government, and U.S. political leaders.

Mr. Thompson called on the U.S. to invite all parties to an "emergency summit" to prevent the implementation of the proposals.

"What we did today was a bit of street theatre, it was a protest, and it will get people thinking, but in reality the only way we can stop the British is with the intervention of the Biden administration," he said.

"We have three months before the British legislate. There needs to be an emergency summit in Washington, where Biden sends a representative of his administration to tell the British government that they can't go down this route. If they go down this route they're taking away the rule of law, accountability, victims' rights, and due process. We've had decades of conflict because there has been no democracy or rule of law."

Thompson added: "If they go down that route then the Good Friday Agreement is meaningless for families."