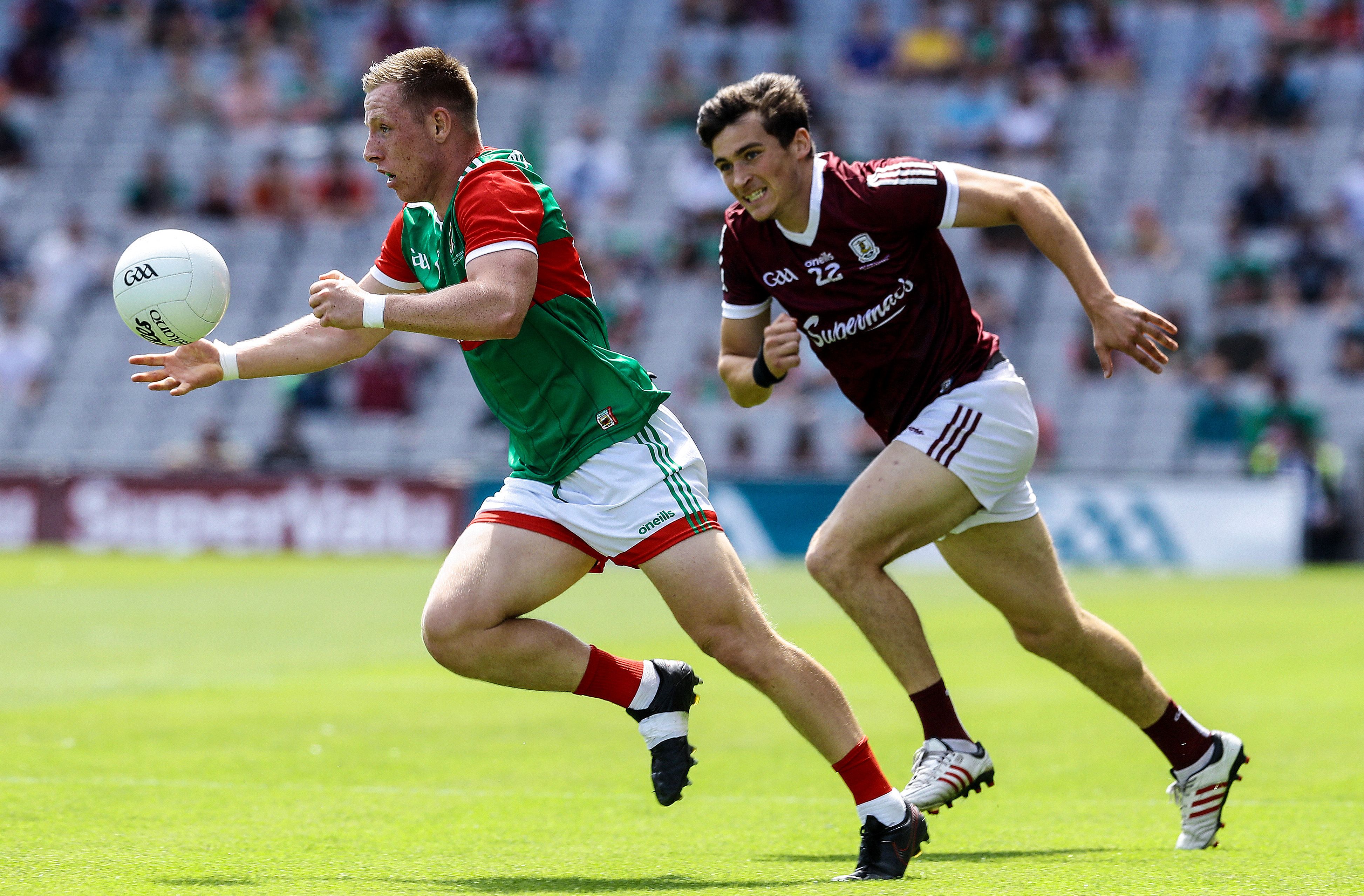 Mayo's Ryan O'Donoghue gets away from Finnian O'Laoi of Galway. INPHO/LORRAINE O’SULLIVAN

Mayo prevail in final of 2 halves

A game of two halves for sure but also one full of recriminations for both sides.

How could Galway, who looked a really good outfit in the first half after which they were leading by five points, die a death in the second when they managed to score only three points from frees?

Padraig Joyce looked shellshocked at the end and will probably look a lot more bedraggled by the end of the week with the wrath of the public raining down on his head.

From Mayo’s point of view, what real ambitions have they of ever winning back Sam (remember him?) if they go out and play like a junior team for the first 35 minutes.

The Mayo who turned up for the second half were the real deal, possibly the second best team in the country over the past decade and who looked hungry for honors.

Mayo looked dead and buried after first-half green flags from Galway’s two big names Shane Walsh and Damien Comer. Despite having a second-half wind, they had a bit of a mountain to climb.

The fact that they scaled the challenge effortlessly gives hopes that this young team is learning at a rapid rate, but you have to factor in the fact that without Cillian O’Connor, they are firing without their greatest hope of getting consistent and important scores.

Still young Ryan O’Donoghue stood up and was counted with a great score on the changeover by slotting home a 37th-minute penalty which started the fightback. O’Connor would have taken that kick bu in his absence, the corner forward showed his pedigree.

And then another man stood up in no uncertain terms… step forward man of the match Matthew Ruane who capped a real leadership performance by scoring a scintillating second goal in the 67th minute – a score that killed Galway off.

While I don’t think Mayo can or will go all the way, I like the new players being introduced such as Padraig O'Hora at full back  and Conor Loftus around the middle. I wish Aidan O'Shea  would make a nuisance of himself at full forward where he has most to offer; but the management keep allowing him to roam where he likes and ultimately that will not get the county across the line.

Mayo will know for sure what they are capable of when they return to Croke Park in two and a half  weeks time  to face the Leinster champions, Dublin, in the All-Ireland semi-finals. I’m sure Kildare people will be apopleptic that I’ve already discounted them, but truth is they have no chance against the Dubs.

Mayo will have a chance but it will be based on how they performed in the second half, not the first.

Galway will point to losing both defender Sean Kelly and corner-forward Rob Finnerty to injuries as a negative on their day. The fact is they were giving the chance to get ahead and stay there but they weren’t nearly good enough. They have a few fine individuals but are miles behind in teamwork and in physique to what Mayo offered. How often did their superior tackling turn over Galway chances into Mayo repossession in the final quarter when the men in maroon were out on their feet after enduring the wide open spaces of Croke Park on a sweltering afternoon acting as a platform for the Connacht Final?

In the end Kerry were playing exhibition football and in the beginning Cork looked like they might cause a surprise – in the middle the football was played and Kerry were much, much better at that, particularly when it came to scoring at Killarney on Sunday.

Kerry will now line out against Tyrone or Monaghan in the All-Ireland semi-final and it is my view that they will beat either team pulling up. Yes, Cork showed that the long ball to a talented full forward can cause all sorts of consternation in the Kingdom’s defense but in fairness, Kerry got over that little tempest and may have learned a lesson about their own frailties as well.

After the Kingdom avenged their 2020 Munster Championship loss to Cork with a statement 22-point win over their arch-enemy in Killarney this afternoon.

Their three second-half goals in a nine-minute period after the interval put paid to Cork and you get the feeling they could do that to any team, including Dublin if they got the run on them.

And the real surprise of the day is that the green and gold powered to glory with their talisman David Clifford failing to reigster a socre aside from one late free.

Kerry avenged the smash and grab of Mark Keane’s late, late extra-time goal in Pairc Ui Chaoimh last November in no uncertian terms and gave their old foes a humbling afternoon out in the Kingdom by the final whistle. A 22-point loss is never easy to endure, particularly in football.

Funny thing is though that if Cork had more team ethic up front in the first half instead of players like Luke Connolly taking wild punts and not feeding the better placed man, they could have been in the lead.

Instead they missed some very goalable and scorable chances while Kerry made them pay fully by scoring a great counter-attack goal from  Brian Ó Beaglaoich, who was switched into full back to mark early goalscored Michael Hurley. The latter looked like he could undo the rearguard early on but over indulgence and a series of wrong options, dinted his and Cork’s confidence as the half wore on.

Kerry lead by five points at the interval and the hope was Cork could regroup and challenge again. Instead they fell apart like a paper house in a storm and had nothing to commend their second half showing.

Paul Geaney got in for a goal from Sean O’Shea’s pass four minutes into the second half and a short time later O’Shea helped himself to a goal when he turned poacher from the impressive Paudie Clifford’s pass to make it 3-14 to 1-7. Geaney  popped up for a second with an opportunistic strike which saw Kerry outscoring Cork 4-11 to 0-2 between the water breaks.

We could have heard the final whistle then and there and no one would have given out about the short time except maybe Clifford the younger who  managed that time to get on the scoresheet with his solitary score of the day.

You can help but love those swashbucklers from the Deise, can you?

They looked a poor side all season and suddendly they emerge to light up our summr with a vintage performance that blew Galway to the four winds. The fact that they managed to stay in front when down a man for half the game tells you also all you need to know abou the spirt of this Waterford bunch, who now play Tipperary in the All Ireland quarter-final this weekend. Another hard ask, but right now you wouldn’t be inclinded to right off a boat that is rising in the water.

Semple Stadium on Saturday could hardly believe what was unfurling before its eyes in the first half as  Liam Cahill’s men raced 16 points ahead. People were pinching themselves. Then a bizarre sending off of Conor Gleeson for a pull across Joe Canning which happened before half time only saw the justice was administered by the officials when he emerged for the second half.

The big question now was couldGalway battle back and write one of the great comebacks of all time.

The answer was ‘no’ ultimately but in fairness to them, they gave it a right old rattle, getting to within a score on two occasion before Waterford made it safe with a four-point winning margin.

Two late Jason Flynn goals, expertly set up by Canning, who also broke Henry Shefflin championship scoring record on the day, caused Deise hearts to flutter but but late points from Stephen Bennett and Michael Kiely gave them the breathing space to advance.

Cork outstay Banner in a marathon

A first-among-equals game if ever there was one but in the end Cork’s nous was a little better than Clare’s in the LIT Gaelic Grounds in Limerick on Saturday.

You had to salute the Banner for dying with their boots on and for keeping the outcome in the melting pot until almost the last puck of the game.

Even when Cork seemed to have steadied the ship late on with a flurry of outfield scores, Brian Lohan’s crew refused to give up and their star man Tony Kelly got a chance to win it at the death when his shot was brilliantly parried by Rebel custodian Patrick Collins.

It was an uphill battle all the way as they recovered firstly from two sucker punch first half goals to find parity entering the home strait. Then when they went ahead, they were pegged back and sub Shane Barrett’s 66th minute score seem to put an end to their notions of progressing, as the score gave Cork a six point advantage.

recovering from two earlier sucker-punches to regain parity for the eighth time entering the final 10 minutes, a third Rebel goal in the 66th minute through substitute

Rory Hayes showed defiance by flying up the field to score a  point, before Kelly earned and converted a penalty to reduced the game to a knife-edge.

Had he got his last second goal, he would have been the hero but this time it wasn’t to be. You have to think that with Cork drawing Dublin on Monday, the force of good fortune may be in their corner this year. It certainly was on Saturday.