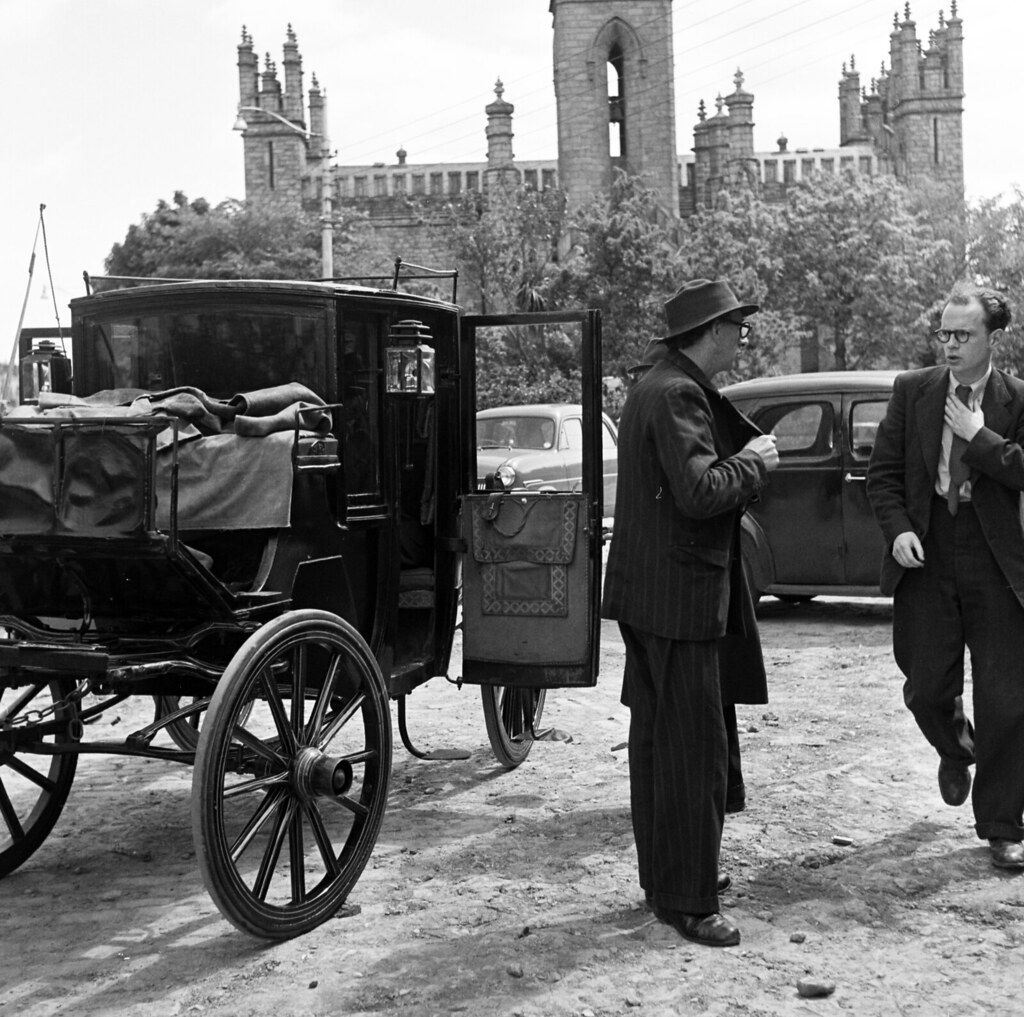 Arts & Leisure June 14, 2021 by Peter McDermott
Patrick Kavanagh, left, and Anthony Cronin outside the church in Monkstown during their journey around Dublin on June 16, 1954. The story below was first published in the Irish Echo on June 16, 2004, the 50th anniversary of the events described.

It began with a scramble up a rock face by Ireland's greatest living poet and its comic novelist of genius.

The “Ulysses” industry was blossoming in America by 1954, but the Bloomsday concept took root in Dublin on June 16 of that year.
A group associated with Envoy, a literary magazine, planned a partial reenactment of “Ulysses,” traveling through Dublin in two horse cabs, on the 50th anniversary of the day James Joyce set his novel.


At midmorning, the participants rendezvoused at the Sandycove, Co. Dublin, home of architect Michael Scott, whose garden backed onto the Martello Tower, where the novel begins, and where Joyce lived briefly in 1904.


The first edition of “Ulysses.”

Drinks were served. And then the poet Patrick Kavanagh decided to scale the sloping cliff, topped by barbed wire, that led to the building.
Brian O’Nolan, aka the novelist Flann O’Brien, whose early work Joyce admired, followed him.

In his classic memoir of post-war literary Dublin, “Dead as Doornails,” Anthony Cronin recalled he’d left the city center with Kavanagh earlier: “Even on the journey out, he seemed to have been absorbing refreshment by some secret chemical process known only to himself.”

Now at the rock face, the much smaller O’Nolan, furious that he’d fallen behind, grabbed hold of Kavanagh’s ankle. Cronin wrote that when O’Nolan was drunk and angry he snarled: “And he was snarling now.”
The two men never had the best of relations, and on this day their friends had to free the novelist’s hand from the foot of the panic-stricken poet.
The plan was to go to Sandymount Strand for the “Proteus” section, then across to Glasnevin for “Hades,” and return to the city center for “Aeolus,” a journey that weekday traffic would have made impossible in later decades.

Cronin, today Ireland’s elder statesman of letters and biographer of Samuel Beckett and O’Nolan, was then a young poet who’d abandoned a career as a lawyer. He remembered being approached by O’Nolan a few weeks before June 16 about a “jant” (Dublinese for a “jaunt”), which was to take place the day of “your man’s book.”

He would not elaborate further, Cronin recalled, because there were too many “chancers and intriguers and go-betweens and Johnny-come-latelys of all descriptions — in the pub we were in.”

He was instructed not to tell their mutual friend Con Leventhal, the registrar of Trinity College, that he would be symbolically representing the Jewish community.

Also included on the trip were John Ryan, owner of McDaid’s pub and the founder of Envoy, and Tom Joyce, a dentist cousin of the novelist who’d never read a line his kinsman had written.

“They made several stops along the route at public houses not known for their Joycean associations,” writes Kavanagh biographer Antoinette Quinn.

That morning, in the Irish Times column “Cruiskeen Lawn,” Myles na gCopaleen attacked Joyce as an “illiterate.” Myles, as he was generally known to friends, acquaintances and barmen, was, of course, O’Nolan himself.


In 1951, Envoy devoted an issue to Joyce on the 10th anniversary of his death, much of which was hostile. Bruce Stewart writes in the current issue of Studies that O’Nolan as guest editor threw the issue together “in a frankly derisory manner.”

Younger Irish writers, those born after World War I, like Benedict Kiely and Cronin, tended to be fans of Joyce. People in the intermediate generation, though, had decidedly mixed feelings about him. Cronin said that O’Nolan and his friends saw Joyce as a “semi-demented genius” whose books were “great fun for the initiate.”

Stewart adds: “What incensed the Envoy writers as a class was Joyce’s success in gulling the commentators in regard to his own character as an escapee from the ‘spiritual paralysis’ of life in Ireland.”

Kavanagh’s contribution to the special edition was a satire attacking the Joyce industry. Quinn* writes: “In making the Bloomsday ‘pilgrimage,’ he was being hoist by his own petard, but he was not one to let past prejudices stand in the way of a day’s merry-making.”

O’Nolan’s first novel, “At Swim-Two-Birds,” was read by Joyce, who did his best to promote it. It was published in 1939 on the strength of an enthusiastic publisher’s reader’s report by Graham Greene, who said that he read the manuscript “with continual excitement, amusement and the kind of glee one experiences when people smash china on the stage.” Years later, Greene said the novel one of the greatest of the century. In 1961, O’Nolan dedicated “The Hard Life” to Greene.

There’s the sense that O’Nolan, as Flann O’Brien, reached his peak at 28. “At Swim-Two-Birds” sold fewer than 300 copies. Wary publishers turned down his second novel and O’Nolan, combative in so many aspects of his life, took rejection badly and later novels were slow in coming. Even as his reputation grew internationally over the years, his insecurity fed an increasing alcohol-abuse problem. Some of that reputation rested on the column that S.J. Perelman, the American humorist and sometime Marx Brothers scriptwriter, called the “funniest newspaper feature ever published.”

In the 1930s, Irish Times editor R.M. Smyllie understood the paper needed go beyond its traditional bases, the Protestant middle classes and the Anglo-Irish, if it was to survive. An important part of the strategy was making it the paper of the intelligentsia. He himself held court in the Palace bar, wearing a wide-brimmed felt hat that became the mark of the Dublin literary set. At the beginning of the war, he acquired O’Nolan as an Irish-language columnist.

However, within a short time, “Cruiskeen Lawn” was written mostly in English. It appeared for more than 20 years, at certain periods up to six times a week.

For his first dozen years as a columnist, O’Nolan was, at least nominally, a senior civil servant. Kavanagh, on the other hand, was broke most of the time. And this was one point of tension between the two men. O’Nolan was an alcoholic who believed people should be able to pay for their own drink. And he looked like the government bureaucrat that he was, always wearing a white shirt and tie. Only the wide-brimmed hat indicated he might be something else.

On one occasion in McDaid’s, though, a sneezing fit left dried mucus on his tie and jacket. The normally disheveled Kavanagh sitting a few seats down seized the advantage and loudly referred to the “disgusting state” O’Nolan was in. The Irish Times columnist left his stool and lunged toward the poet.

In “Dead as Doornails” Cronin recalled: “Kavanagh retreated, tittering at first and pretending that the attack was a comic matter. Then he suddenly got terrified and dashed behind the counter. I got Myles back to his seat, but it was some time before Kavanagh, now talking to all who would listen about blackguardism and violence, could be persuaded to come out.”
By Bloomsday 1954 both men had come through particularly difficult periods. In February, Kavanagh lost a libel action he’d taken against a Dublin periodical and was appealing, with several luminaries sending money to a support committee. T.S. Elliot sent 20 guineas.

In any case, he appeared to love the daily publicity the court case gave him. Appearing for the defense was John A. Costello, the former taoiseach, who brilliantly cross-examined Kavanagh. When election time came around, just a few weeks before Bloomsday, Costello was returned to power. The poet voted for him.

The previous year O’Nolan had been forced from his job in the civil service. His protector there, also a literary man, had warned him his bosses were wearying of him.

Like most great humorists, O’Nolan was a serious person most of time. And June 16, 1954, was no exception. “While we were retracing the route of the funeral party he wanted us to preserve a decorum proper to the occasion and to behave at all other times with the outward respectability of the characters of the book,” writes Cronin in “No Laughing Matter,” his biography of O’Nolan.

He was annoyed when the others sang songs. The dentist proved to have inherited the family’s singing gene, and encouraged by Kavanagh, gave an excellent rendition of “Silent, O Moyle, Be the Roar of Thy Waters,” his cousin’s favorite.

The party stopped off to place bets and listen to the running of the Ascot Gold Cup, which was also run on June 16 in 1904 and mentioned in “Ulysses.” In 1954, the winner was named Elpenor, a French-trained 50-1 outsider.

Elpenor was a character in the “Odyssey,” a companion of Ulysses, who, Cronin wrote, “falls off a height during some fighting, as some of our party had so nearly done, cracks his skull and dies.” Elpenor is represented in the novel by Paddy Dignam, whose funeral route they were following. Joyce had always claimed that his novel had prophetic powers, and when Cronin pointed this out, too late for the bettors, Kavanagh accused him of withholding information.

Cronin, however, concluded his account thus: “The trip, I am glad to say, ended happily in the back bar of the old Bailey. The jealousies among the mountaineers of the morning seemed have been forgotten and relations between Myles and Paddy were as good as I ever remembered them.”

* Antoinette Quinn died in May 2015. Her book “Patrick Kavanagh: Born Again Romantic” is still considered the definitive study of the poet. Anthony Cronin, who died in December 2016, described it as a “wonderful biography of this complex spirit.” His “Dead as Doornails,” first published in 1976, is available in paperback and Kindle, as is his "No Laughing Matter: The Life and Times of Flann O’Brien."