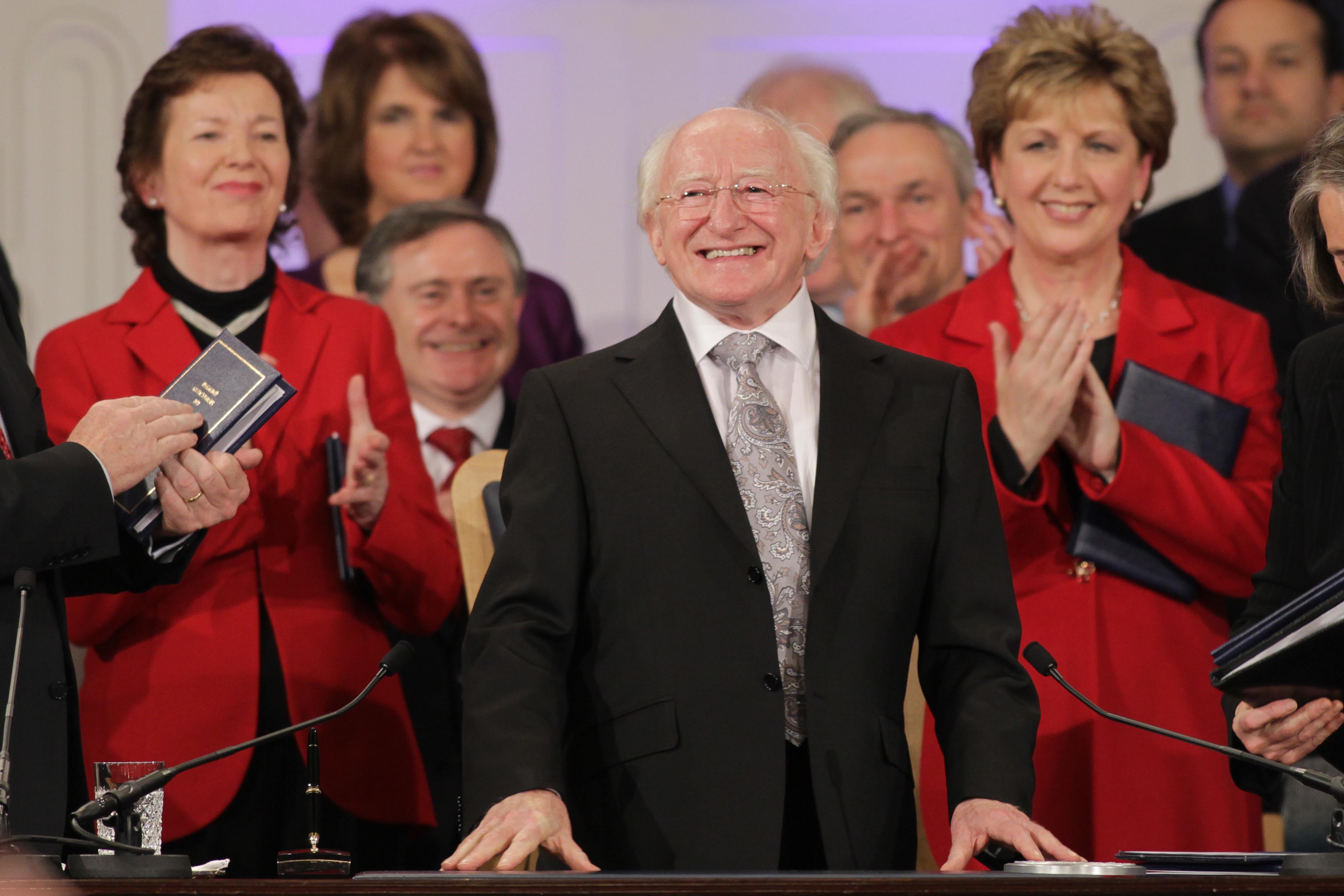 President Michael D. Higgins at his inauguration ceremony at Dublin Castle in 2011. Behind him are former Presidents Mary Robinson (1990-1997), left, and Mary McAleese (1997-2011). All three were elected Irish head of state using a form of ranked-choice voting. ROLLING NEWS.IE/GIS

That’s how political consultant Phil Walzak described the likely impact of ranked-choice voting in New York City as he looked forward to 2021 on WNYC’s “The Brian Lehrer Show” in December.*

Most would agree, and those who view its introduction with a degree of caution tend to emphasize the “wild card” part of the equation.

Former New York Irish Center Executive Director Paul Finnegan is one, as an interested observer of New York elections for decades and as someone who in 2021 has lent assistance to a candidate running for office in Queens.

“It works well at home,” the Galway City native said of ranked-choice voting. “But that’s in multi-seat constituencies.”

Under the Single Transferable Vote system of proportional representation, his own Galway West district or constituency, which includes Galway City, elects five members to Dáil Éireann. For many years, Ireland’s current president, Michael D. Higgins, was one of them; as a member of the Labour Party, which usually got less than a fifth of the vote nationally, he might have struggled to have had a political career under a non-PR system.

“We’ll see how it plays out here,” Finnegan said of New York’s form of preference voting.

Most attention is focused on primary voters being able to express preferences for up to five candidates in the mayoral contest. This has added a great deal of interest to the crowded field on the Democratic side, which media outlets are saying has eight significant contenders involved.

Co-chair of the UFT’s Irish-American Committee Doris Meyer expressed approval of the reform and gave a practical example of its efficacy. “Over the years, as an elementary school teacher, I offered students ranked-choice voting when deciding things like what to have for a holiday party: for example, pizza, Chinese food or a sandwich bar. They were always satisfied with the outcome,” she said. “Although the issue is complicated and debatable, I’m in favor of RCV because even if one’s first choice loses, the vote still counts toward electing a candidate, and it allows voters to support like-minded competitors to defeat an unfavored candidate.”

A New York assemblyman for 18 years, Feldman’s own electoral career ended with a contest in which the victor got rather less than 40 percent -- the tight four-way 1998 primary battle for Chuck Schumer’s vacated seat in the U.S. House of Representatives. More on that below.

Writer Kevin Holohan, who lives with his wife and son in Brooklyn, outlined some of the reasons engaged voters are welcoming the reform. “Ranked-choice voting discourages divisive and negative campaigning and fosters coalitions and cross-endorsements among candidates. You cannot afford to denigrate your opponents and alienate their supporters; you might just need their transfer votes,” he said. “It eliminates the deplorable spectacle of two widely despised candidates with, say, 40 percent of the vote between them ending up in a run-off for an office.”

Holohan, whose debut novel “The Brothers’ Lot” is set in his home city of Dublin, added, “More people get palatable representation instead of a small bloc getting exactly who they want in office. It is inherently more representative and democratic, the latter being a term more often espoused in rhetoric than exhibited in practice.”

He said, “This is a heartening development in these United States and offers a future beyond the punishing and destructive death-spiral of the two-party holmgang.”

“Ranked-choice voting promises to give voters greater power in making choices about who will represent them," said Eileen Markey, the editor of "Without Compromise: The Brave Journalism that First Exposed Donald Trump, Rudy Giuliani and the American Epidemic of Corruption," an anthology of the work of muckraker Wayne Barrett. "It opens up the electoral process to new challengers and offers the potential for coalition political campaigns. At the same time it's complicated and stretches the election from a day to several weeks."

Markey, who lives with her family in the Bronx and teaches journalism at Lehman College, added, "I'm a little concerned that it has the potential to erode rather than bolster New York City voters' confidence in our elections."

Peter Quinn, who was a speechwriter for Governors Hugh Carey and Mario Cuomo and is the author of “Banished Children of Eve,” among other novels, is enthusiastic. “I’m an old Tammany man,” he said. “As far as I'm concerned, the more times you can have your vote counted, the better.”

Quinn’s quip gets to the heart of the matter — you have only one vote; it just gets to move around in specific circumstances at your direction.

It’s been said that ranked-choice voting is the “single-winner variant” of the Single Transferable Vote system of PR. And for proponents of PR it can be an acceptable compromise. In 2010, when negotiating a pact with David Cameron’s Conservatives, Britain’s centrist Liberal Democrats — whose voters have always been greatly underrepresented in terms of seats at Westminster — extracted a promise of a referendum on Alternative Vote, the name sometimes used for ranked-choice voting outside of the U.S.

During the subsequent 2011 referendum, which was lost, Irish presidential and special elections as well as some Australian elections (that country also uses STV for some contests) were cited as examples of where it has worked well.

Victory on the 4th ballot

Indeed, Irish presidential elections over the past 30 or so years have provided some interesting races that demonstrate just how ranked-choice voting can work in the real world.

In 1990, Labour’s Mary Robinson, with 38.9 percent, came in second behind Brian Lenihan of Fianna Fáil, who had 44.1 on the first ballot (locally known as the “first count”). Fine Gael’s Austin Currie was in third place, with 17.0 percent. When Currie was then eliminated, his second preferences went overwhelmingly to Robinson and she beat Lenihan by 51.9 percent to 46.8 on the second and final ballot.

In 1997, Fianna Fáil’s Mary McAleese had a solid 45.2 to 29.3 percent lead over Mary Banotti of Fine Gael on the first ballot, and when the other three candidates were eliminated and their preferences distributed, she won the presidency by 55.6 percent to 39.2. McAleese was unopposed for her second term in 2004.

In 2011, Michael D. Higgins had 39.6 percent after the first ballot, and the second-placed of the seven candidates, independent Seán Gallagher, had 28.5 percent. Higgins eventually won on the fourth ballot with 56.8 percent to Gallagher’s 35.5.

The 77-year-old Higgins won reelection in 2018 by defeating the five other candidates with 55.8 percent on the first ballot.

The Irish and Australian way could be coming to a city near you. “According to FairVote, an electoral reform organization, ranked-choice voting is used in 25 cities across the country,” Vermont’s CBS-affiliate WCAX reported on what it said is a bipartisan push. “It’s used for statewide elections in Maine, and in 2024, it will be the way residents of Alaska vote for the next U.S President.”

The report included a dissenting voice. “When you make voting more complicated there will be negative consequences,” said Professor Jason McDaniel of San Francisco State University. “My take on ranked-choice voting is that the claims, the hoped-for sort of benefits are somewhat exaggerated.”

With regard to increased voter confusion, though, the digital news platform the City reported that a poll conducted for Common Cause New York and Rank the Vote NYC of more than 600 who’d participated in the special elections in Council Districts 24 and 31 in February “found that more than 95 percent of voters found the ranked-choice voting ballot simple to fill out.”

For some, this is ultimately an issue of fairness. At what point can a system that aims to select a candidate who is, to use Kevin Holohan’s word, “palatable" to the broadest range of voters cease being described as a “wild card”? When does what consultant Phil Walzak calls an “interesting experiment in democracy” come to be seen as a superior form of it?

The U.S. is contending with several democratic deficits, notably the Electoral College and also the fact that a state gets to elect two senators whether it has one million residents or 30 million. But the custom that the most votes, however short of a majority, is enough for a win is up there with them.

Daniel Feldman recalls a 1998 primary race in his podcast series in which the four candidates each had more than a fifth of the popular vote, and that meant all were far from having the 50 percent plus one vote required under the 2021 system

Feldman got 22 percent; the late Noach Dear, the most right-wing candidate who had the New York Post’s endorsement and limitless money to ferry people to the polls, also got 22 percent, but edged Feldman for third place; current Queens DA Melinda Katz, then an assemblywoman for three years, got the New York Times’ nod (without the newspaper quite explaining why it thought her a better candidate than Feldman, who had built up an impressive legislative record in his 18 years in the Assembly) and 27 percent of the vote; but .6 percent ahead of Katz with 28 percent was the Daily News’ pick, a former aide to the soon to be Senator Schumer.

Anthony Weiner, the Times said, “who is known for his glib speeches on the Council floor, attributed his victory to a strong vote in the district from Mr. Schumer, who endorsed him, and his energetic scramble throughout the district -- which includes neighborhoods in Queens and Brooklyn -- over the last few months.”

Feldman had, according to Rep. Jerry Nadler, written more books than his three opponents had read between them; he was generally regarded as the candidate of substance and one might see how, in an alternative history with ranked-choice voting, he might prevail with the same opponents (and the inevitable no-hope stragglers that the system tends to attract).

A Noach Dear victory might have been the most anomalous on paper, ideologically speaking, and the least likely if ranked-choice voting were used. But lots of other issues are always involved in any contest.

“In my 1998 race, the split was more complicated in that geography, demographics and personality also played roles,” Feldman said, “but the same basic principle applied, as it does with respect to the present mayoral campaign.”

The John Jay College professor added that ranked-choice voting “certainly does not guarantee the election of the best candidate. It does, however, assure that in a multi-candidate race the candidate who wins will more accurately reflect the preferences of the electorate.”

It might be that the model used by Doris Meyer – in which her elementary school students opted not just for a single choice, but had to take the time to consider a range of them – is the way to go for democracy in New York.