Home 'You Wouldn’t Be Anything To…?' 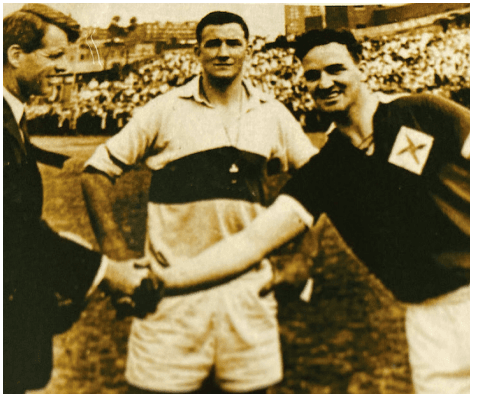 Senator Robert Kennedy shaking hands with Louth’s Frank Lynch before the Cardinal Cushing game in Gaelic Park, New York, in 1965. Peter Nolan Sr., the Offaly and New York defender, is in the middle.

'You Wouldn’t Be Anything To…?'

From growing up to grown, from childhood to young adulthood and even now, in what I will euphemistically call middle age, I have been asked this question over and over. At Gaelic grounds, in bars, at Irish events, and in recent years online; usually on Facebook, where I am sometimes mistaken for the man himself.

The question empowers those asking to somehow be transported back into their childhood. Men who played the game with or against him. People far too young to have seen him play but who have heard the name across the years in the stories told by their fathers, or more likely grandfathers.

His name, my name. And always, I have been proud to answer: “Yes, I am his son.”

When I tried my hand at the sport myself, I heard them say: “If you’re half the footballer that your father was, you’ll be doing alright.”

I never felt slighted by that. Always, I knew that half as good would be plenty good enough.

And often I would hear their stories. These reminiscences were seldom new to me but each teller brought his, always his, own passion to the telling.

“When he kicked the ball the stands shook.” Ok, that was a new one. A man stopped my mother in the street outside of their home in Ireland to tell her that one a few years ago. A brand new tale to stack upon the pile of stories that through the decades combined to make a legend of my father.

There was the free kicked over the bar from alongside “Lefty’s Box” at Gaelic Park in the Bronx. 70 yards if it was a foot and as my father himself has often said … “it gets longer every year.”

Another ball that went a long way was one kicked down the town. During a tough match against Laois, apparently fed up with having to clear ball after ball, his frustrations got the better of him, and finally when yet another one of  his clearances came right back to him he let fly, kicking the ball out of the pitch, over the stands, and out of the stadium. That ball may still be rolling down the streets of Portlaoise half a century later!

Recently I was contacted on social media by a man I did not know. He told me that his father idolized mine and that when he coached him as a boy in the skills of Gaelic football he would punctuate his demonstrations with the remark, “that is how Peter Nolan would catch the ball.”

One image that has stuck with me came at the height of the celebrations for Offaly’s dramatic All Ireland hurling victory over Limerick in 1994. My father and I had attended the match together, following the crowd to the post match celebrations at the Dublin hotel where the heroes of the day were toasted.

In the midst of this joyful chaos, a man I would describe as "hardy" approached my father and with tears welling told him that he had been his idol as a boy. To see that expression of vulnerability coming from this man has stayed with me across the years.

And then there were the introductions made possible by that name.

In 1979, I was playing for the New York minors. We were stationed in Tuam and so a few of us were brought to the dog track by one of my father’s former rivals, the legendary Sean Purcell. My dogs lost every race that night but Purcell and his fellow "Terrible Twin" Frank Stockwell, whom I would also meet on that trip, were vocal in their admiration for my father, easing the blow of a handful of pounds lost.

Some years later while on our honeymoon, my wife and I stopped at a well-known pub in Waterville, Kerry. I was aware of the owner’s identity but never expected to meet him. In fact, we had stopped by to say hello to a friend we had known from New York that worked in the bar in question. Then as we sat down while attempting to decipher whether the locals at the bar were speaking English or Gaelic, the great Mick O’Dwyer himself came out to meet us.

The famous Micko was generous with his praise for my father and greeted us like old friends, making for a warm welcome and lovely memory.

The best of all the stories and the biggest piece of my father’s legend was, of course: “We’d have won the All Ireland (in 1961) if they had brought your father back.”

“That auld priest” was to blame, the story went. The priest in charge of the County Board had refused to bring my father back for the All Ireland semi-final versus Down in 1960 or the All Ireland Final the following year.

Given that Offaly fell to a Down team that is regarded as one of the finest of all time by just two points after a replay in 1960 and then by a single tally in the 1961 Final, it is easy to see how my mother was sometimes referred to as “The Woman who lost the All Ireland.”

With no disrespect to the great men of that Offaly team, I’ve lost count of how often I was told in no uncertain terms that had my father been repatriated in 1960 or 1961 that the breakthrough of 1971 would have occurred a decade sooner.

With no Sam Maguire to his credit and few if any televised images to document his prowess, all we are left with to document my father’s career, like those of his contemporaries, are yellowed press clippings and the word of mouth accounts of those who saw him play in the flesh.

Clippings and stories handed down from generation to generation and even if the question comes less frequently as the years pass, it still comes.

“You wouldn’t be anything to Peter Nolan from Offaly, the great footballer?

The question has never changed and neither has the answer.

Peter Nolan Jr. is a native of New York who has maintained strong Irish roots by living in Ireland for a time and playing football here for his father’s home club of Clara in Offaly and for Offaly and New York in the U.S.  Married with two adult children, he is a creative writer and sports writer for numerous publications in the U.S. This piece is an extract from "Grassroots: “Stories From The Heart Of The GAA," compiled and edited by P.J. Cunningham.