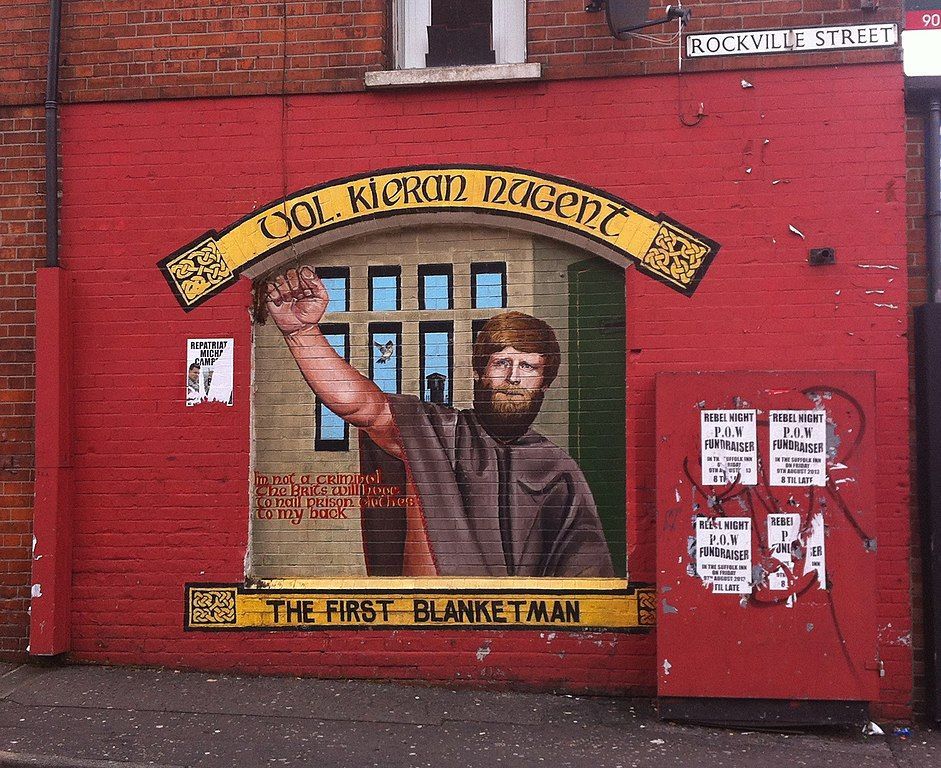 Almost overlooked, in this 40th anniversary year, is the historic American legacy which the 1981 Hunger Strikers inspired.

British officials who plotted to undercut Republican support by dressing up prisoners as criminals rather than wearing their own clothes as special category political prisoners, assumed the ploy would work well in America. Their criminalization plans did indeed become a historic turning point, just not one that British Prime Minister Margaret Thatcher envisioned.

Hundreds of Blanketmen refused to become living symbols so that “Britain might brand Ireland’s fight 800 years of crime”. Beginning with Kieran Nugent, they defied British efforts to bully, beat and break them into submission.

The Republican Movement, and indeed the H-Block prisoners themselves, recognized that America was a crucial battleground, appealing to Irish Americans and specifically Irish Northern Aid to plan publicity campaigns and political support for the Blanketmen.

Released former Blanketmen including Kieran Nugent and Fra McCann, were denied visas, but arrived illegally to bring their story to American newscasts and newspapers.

Another Blanketman, Joe Maguire was smuggled into the 1980 Ancient Order of Hibernian National Convention in Florida. His plea brought a standing ovation and pledges from AOH members across the country who would join national protests being planned by Irish Northern Aid in the event of a Hunger Strike.

Thousands of Americans in cities across America were inspired to march every day during the Hunger Strike beginning October 27th and ending December 18, 1980. American news coverage followed.

As Fra McCann told me after seeing headlines about the Irish Hunger Strike in lights in Times Square, the Irish struggle was now a major American issue.

Instead of making a settlement at the end of this first Hunger Strike, Prime Minister Thatcher saw only her chance to break the protest once and for all. Irish America was ready.

When Bobby Sands began his Hunger Strike on March 1st the huge protests around the country were covered daily on local and national news. On the day of his funeral more than 10,000 closed down streets between the British Consulate and Dag Hammarskjold Plaza in New York. Some NYPD members stood at attention or saluted. Massive protests took place in cities across America.

The British tried to restore their image by dispatching Prince Charles to sit alongside Nancy Reagan at New York’s Lincoln Center. He was met by more than 20,000 who stood with brothers of Bobby Sands and Ray McCreesh, and sisters of Patsy O’Hara and Joe McDonnell.

When Charles complained about his reception, New York’s Mayor Ed Koch advised him to “get out of Ireland." Princess Margaret immediately canceled her scheduled American tour. Britain had set out to make criminals of Irish Republican prisoners and instead made their royals symbols of injustice who could not show their faces in America.

The Hunger Strikers triumphed over British criminalization, and America was part of their victory.

The American legacy of the Hunger Strikers had only begun. With Ireland now proven an important issue to many Americans, political leaders looked for ways to reflect this support. Ending visa censorship against Irish Republicans topped the list.

These issues became the Irish agenda and support for them grew during twelve years of administrations aligned with Margaret Thatcher.

At the Irish American Presidential Forum in 1992, held in Manhattan, Democratic candidate Bill Clinton was faced with this agenda and made historic pledges.

Sometimes historians ask who should be credited for me being on that panel and asking Clinton whether he would grant a visa to Gerry Adams. Well, it was part of the legacy of the Hunger Strikers and those they inspired to march for them day after day.

Martin Galvin is currently AOH-Freedom for all Ireland Chair. Between 1979 and 1994 he was National Publicity Director of Irish Northern Aid and Editor of the Irish People Newspaper