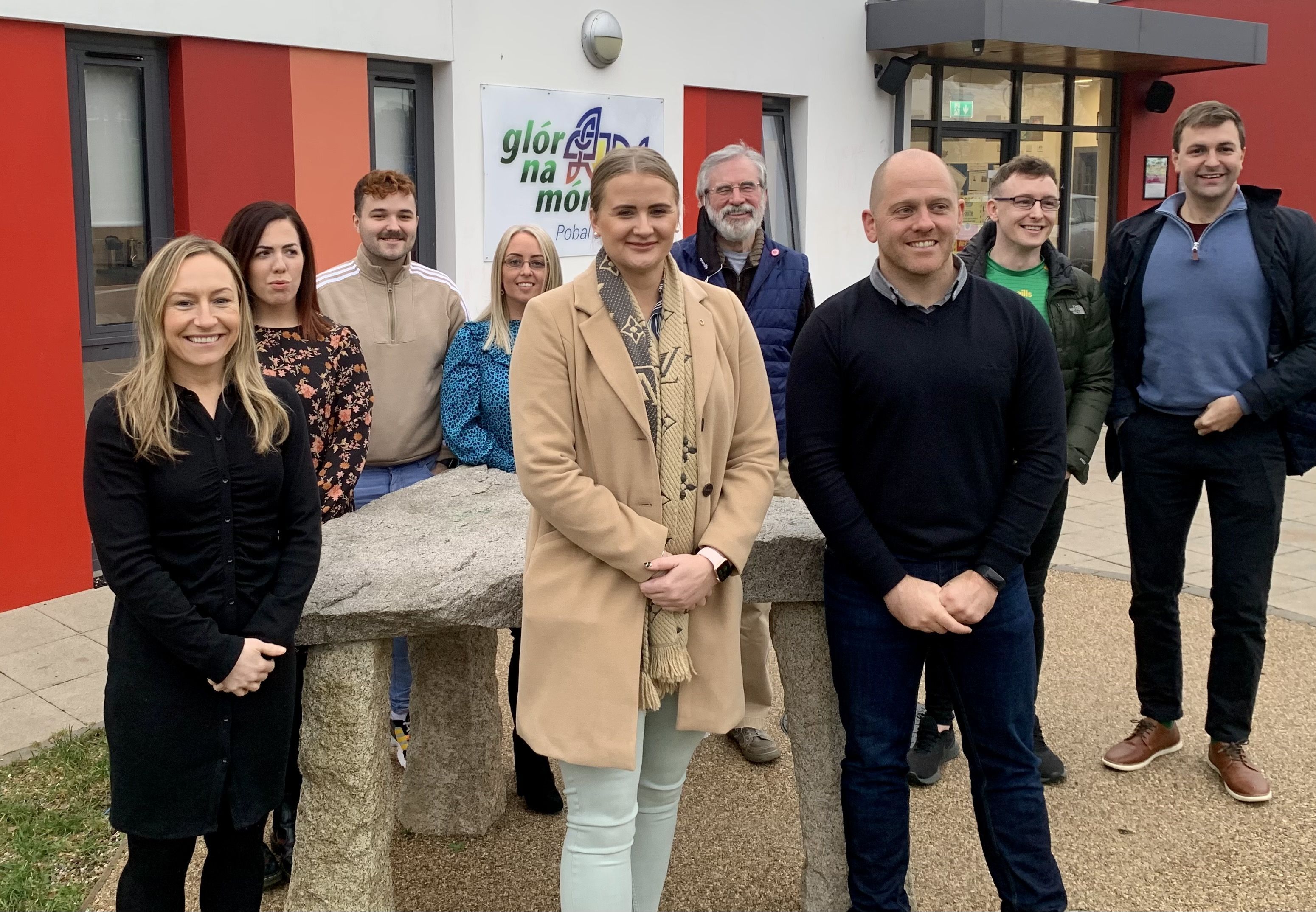 Recently I met with activists involved in the Glór na Móna project in West Belfast. Along with the local MLA, Aisling Reilly, they briefed us on their work in the field of youth provision through the medium of Irish.

Glór na Móna was established in 2004 and since then has gone from strength to strength. The enthusiasm of its activists reflects the growth in the numbers of people who now conduct their everyday business and social life through Irish. This is especially true of the Irish medium education sector.

In 1971, the first Bunscoil was opened on the Shaws Road in West Belfast with nine pupils. Today there are pre-school, primary level and secondary level schools across the North accommodating almost 7,000 children.

Glór na Móna has pioneered Irish-medium youth-work and now caters fro 450 young people each week across the city. Among other projects it has also established are several dealing with local community history and heritage recovery.

Since June 2016 it has operated from its own community hub, Gael-Ionad Mhic Goill, just off the Whiterock Road in the City which was funded by the Irish Language Investment Fund (Ciste), Belfast City Council and the Department for Communities.

The following year it was awarded the prestigious, All Ireland Pride of Place Award, and the National Glór na nGael Main Prize as the most effective Irish language organization in Ireland. But these successes, and a dramatic increase in its work in the Irish medium youth sector, quickly saw the organization outgrow the existing center.

Consequently, our conversation with them focussed on the next stage in the development of Glór na Móna – the construction of an exciting multi-purpose youth, community, family and heritage hub – Croi na Carraige - on the Belfast City Council-owned waste ground adjacent to them.

The new facility would create space for Irish speaking families, adult education projects for all ages, community festivals; arts and culture event, including space for concerts, lectures and films.

Glór na Móna appointed an integrated design team and have produced an ambitious draft design for the Croí na Carraige project that maximizes the space on the waste ground adjacent to the Gaelionad and opens up opportunities for the Upper Springfield community that will cover the next 20 years. They have funding for an Economic Appraisal, and will commence this work before Christmas.

Aisling and I came away from our meeting with the Glór na Móna team hugely impressed by their commitment to providing first class youth services for young people through the medium of Irish. Aisling will be meeting them again next month, along with Minister Deirdre Hargey, who has committed to looking at funding opportunities.

ALL ABOARD THE NUMBER 11 BUS

At our cruinniú in Glór na Móna I noticed a Pop Up advertising one of the projects Glór na Móna is pioneering. "Faoi Scáth an tSléibhe- Connecting People and Place in the Upper Springfield Area" is a heritage project aimed at making local history vibrant and accessible. The Pop Up contained a photo of the Number Eleven Bus wending its way along the Whiterock Road. That brought back many happy memories. I used to work in The Duke of York pub in Commercial Court off Lower Donegall Street in the late 1960s. I was a regular passenger on the Eleven Bus when I wasn't on my bike, or my Honda 50.

Jimmy Keaveney was the boss in The Duke’s. Well his mother, Mrs. Keaveney was the real boss. She lived upstairs, above the main bar, but by the time I landed there as a young curate Jimmy ran the place. He was a decent man. I liked working in The  Dukes. The customers were welcoming and interesting. Newspaper men and women from The Newsletter and the BBC. Trade Union officials. Communist Party activists. Old Labour Party stalwarts. Some of Belfast’s republican leaders. Musicians, locals and visitors. And ordinary decent drinkers. Plenty of singing on Friday and Saturday night. In both the lounge and public bars and in a wee converted store room tucked in adjacent to the bar. No party songs. Although Henry Joy marched to the scaffold most weekends, and Joe Hill went on to organize as well.

After closing time and the place was cleaned up I would dander around to Castle Street for the last bus home. Number Eleven was the last one going up the Falls and the Whiterock Roads. If I was taking the bus to work in the mornings I usually got the one down the Springfield Road. It stopped at New Barnsley up from and opposite the steps at the top of our street, Divismore Park. But at night it was Number Eleven. The buses used to be trolley buses, and before that trams.

The last Number 11 bus on a Saturday night was special. All human life was there. Mostly with drink taken. Pretty girls. Old lads with carry outs of Guinness in stout little brown paper bags. Or a bottle of Mundies. Or Drawbridge. A flagon of cider from Coyles in Hasting Street. Younger folks with fish suppers wrapped in newspaper, or scallops from Raffos. Scallops are deep fried slices of potatoes. Couples returning from a night out at the pictures. Or maybe a dance or a Céili. Smoking was permitted upstairs. It enveloped everything. There was an overpowering smell of salt and vinegar, stale smoke, sweat, perfume, aftershave, and pungently scented flatulence.

The last bus was always overcrowded as it left Castle Street. The bus conductor usually ambled up and down the bus collecting fares and dispensing tickets. But on the last bus on Saturday night he sometimes didn't bother. He couldn't move the length of himself. People stood in the aisles and sat on the stairs. Hearty souls crowded on to the platform. These buses had no doors. A pole from floor to ceiling was the only barrier between the entrance/ exit and the road. Many a time as I ran to catch the last bus I caught hold of the pole as the bus drew away from the pavement and ran alongside it before gathering myself to hop on board. And I wasn't on my own. Many latecomers risked that dangerous boarding challenge rather than face the long walk home.

And the entertainment was free. A sing song. Elvis. The Beatles. Bridie Gallagher. Tom Jones. Perry Como. Frank Sinatra. Percy French. Maybe a subversive offering of The Merry Ploughboy or We Shall Overcome. At times it seemed like the bus swayed from side to side in harmony with the singing. Lots of slegging as the bus slowly discharged its load of human beings at Albert Street, Leeson Street, the Pool, Iveagh and Beechmount, then St. James and the Rock Streets before swinging right at the City Cemetery and up the sharp incline past the long grey wall at McCrory Park before stopping opposite Whiterock Drive to dislodge Whiterockians. By then only Ballymurphians or Turf Lodgers were left along with the odd straggler from New Barnsley.

Eventually, the Top of the Rock and a right turn on to the Springfield Road and right again into the terminus at Divismore Crescent where the last of us disembarked, bade our good nights and went home. Or if we were lucky off to somewhere else to finish our choral journey in comfort.  Yes the Number Eleven Bus was the transport of choice for most of the Ballymurphy traveling proletariat.

Then 1969 came along and that was the end of that.