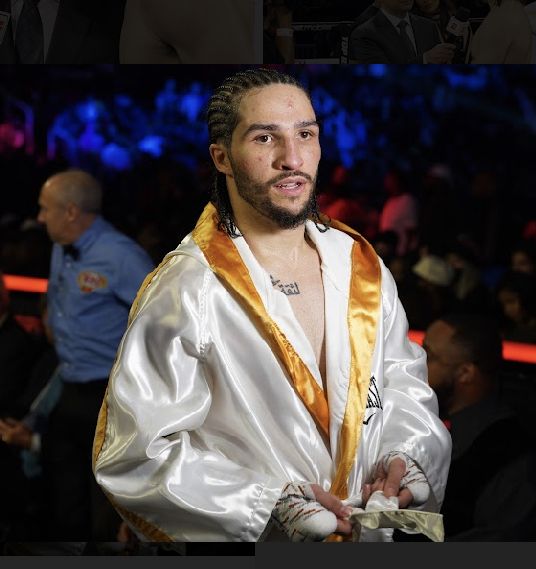 3rd Ali for Garden on Saturday

Nico Ali Walsh’s revered grandfather – boxing’s greatest of all time – had 10 fights before his first appearance at the hallowed Madison Square Garden at age 20, back in October 1962. Muhammad Ali got off the canvas in the opening minutes of that scrap to score a fourth round TKO.

This Saturday, Ali Walsh, aged 21 and just four months a professional, enters the famed Mecca of boxing for just his third fight to continue the family legacy. He’ll be the third member of the Ali bloodline to do battle in the Garden after his grandfather and retired aunt Laila Ali.

The young newcomer, who’s won his first two fights by TKO, faces an early crunch match against Reyes Sanchez in a battle of undefeated middleweights. Out of Topeka, Kansas, Sanchez is 6-0 [2 KOs] and eight years his senior.

Ali Walsh vs. Reyes, a four-rounder, kicks off a joint Top Rank-DiBella Entertainment card on ESPN and ESPN Deportes (simulcast on ESPN+) at 9 p.m. ET.

Also at the Garden, albeit on the full undercard that will be streamed live on ESPN+ at 5:30 p.m. EST, Westmeath light heavyweight “Mighty” Joe Ward [5-1, 2 KOs] shoots for his sixth straight when he meets Britton Norwood [10-3-1, 7 KOs] in a six-rounder.

The second son of Muhammad Ali’s twin daughter Rasheda and her Irish-American husband Bob Walsh, Nico grew up in Chicago. Boxing, and his maternal grandfather’s powerful legend, were amplified from his infancy by television and videos of the “Greatest.”

Inevitably, Ali Walsh felt the lure and began to dabble.

“I started like when I was 10. It was with Mike [Joyce], my uncle – it was something that I was just messing around with [but] I started to take it more and more serious as I got older,” he told the Echo. “When I turned 14, I actually was like, okay, I should start going into the official amateur program.”

Trained by Joyce – an attorney, former pro boxer and founder of Chicago’s famous Celtic Boxing Club, with Mayo and Limerick roots – Ali Walsh had some 30 amateur fights. “Obviously I had more wins than losses but the losses I really took to heart and I just tried to learn from,” he said.

On Aug. 14, 2021, Ali Walsh, a month after turning 21, debuted in the paid ranks. He entered the ring at the Hard Rock Hotel & Casino in Tulsa, Oklahoma, wearing a pair of his grandfather’s white Everlast shorts passed on to him after Ali’s death in 2016.

In the other corner was one Jordan Weeks, nine years older and with a respectable 4-1 record. The scheduled four rounder lasted just 1:49.

Ali Walsh was back in action two months later, going three stanzas with late bloomer James Westley II – who’d only debuted himself last June in Atlanta at the ripe old age of 36. That also ended in a knockout.

The caution for fans thronging to Madison Square Garden this Saturday to watch Ali Walsh is not to expect a fistic Muhammad Ali clone in the ring. For all his reverence for his legendary grandfather, his favorite fighter all-time [Mexican superstar Canelo Alvarez is #2], emulating the great Ali’s fighting is a no-no for the grandson.

“I think my grandfather is one of the best examples of what not to do in boxing, you know, like putting your hands down, leaning back. He got away with that stuff –-- he got away with it because it was him and it’s not something that I look to emulate but he looked great doing it,” the astute Ali Walsh pointed out.

Famed trainer and analyst Teddy Atlas noted some of the great Ali’s other unconventional techniques.

“He never went to the body,” Atlas started. “Early on, he didn’t sit down on his punches [set himself for power] and only punched to the surface not through it, so people didn’t think he could punch. But later in his career, he did set himself and he hurt guys others didn’t, like Oscar Bonavena who Frazier couldn’t drop in two  fights, but Ali did.

“He didn’t really use feints to keep a guy off balance, or freeze him, or off set his timing;  he was so fast with his hands and legs he never had to.”

For his part, Ali Walsh considers himself a boxer-puncher. “I’m a pressure fighter and I try to switch gears -- when I need to pressure the opponent, I do so. And when I don’t need to, when I need to be more of a smarter, calculating fighter, I’d like to think that I just switch the gear.”

During his 40 years in boxing, Joyce has not only boxed professionally and trained fighters, but also promoted and managed them.

In order to attend the event, all guests age 12 and older are required to provide proof of COVID-19 vaccination [this means having at least one dose of a COVID-19 vaccine prior to attending]. MSG’s comprehensive COVID-19 guidelines, including those regarding children under 12, can be found at https://www.msg.com/madison-square-garden/faqs.