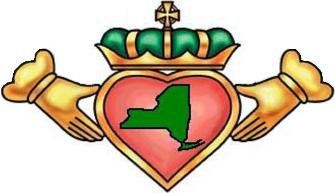 The New York State AOH is gathering in Manhattan

The New York State Ancient Order of Hibernians will be hosting their annual Freedom for All Ireland social this Thursday, November 18, at the restaurant "Stout" located at 133 West 33rd Street in Manhattan.

Stated a release: "The Hibernians' Freedom for All Ireland fund continues to support organizations that seek to heal the divisions of the past by addressing the legacy of the conflict in Northern Ireland with justice, while also supporting cross-community groups that work to a brighter future where the suspicions and divisions of the past are replaced by parity of esteem and a shared commitment to each other."

The speaker for this year’s event, added the release, "is a local entrepreneur and fellow Irish American, Joseph Smith.

"Mr. Smith is a true representative of the Irish American story. Mr. Smith, a native of Belfast, immigrated to the United States after being detained in the notorious Maze prison. Arriving with only fifty dollars in his pocket, through hard work and dedication, he is now the owner of the highly successful Bobby Van’s Steakhouses which generate $100 million a year annual sales while employing scores of Americans - once again proving what an Irishman can do in America when freed from the shackles of discrimination and oppression of British ruled Ireland."

Concluded the release: "Mr. Smith has never forgotten where he has come from and continues to support efforts to give others in the north of Ireland the same opportunities he has enjoyed in America. Mr. Smith has served on the board of Sinn Fein for 25 years and is a dedicated Irish Republican working to the promise of an Ireland 'cherishing all the children of the nation equally, and oblivious of the differences carefully fostered by an alien Government.'"

Doors open at 7  p.m. There is no cover charge. In compliance with New York City requirements attendees must be prepared to show proof of vaccination.