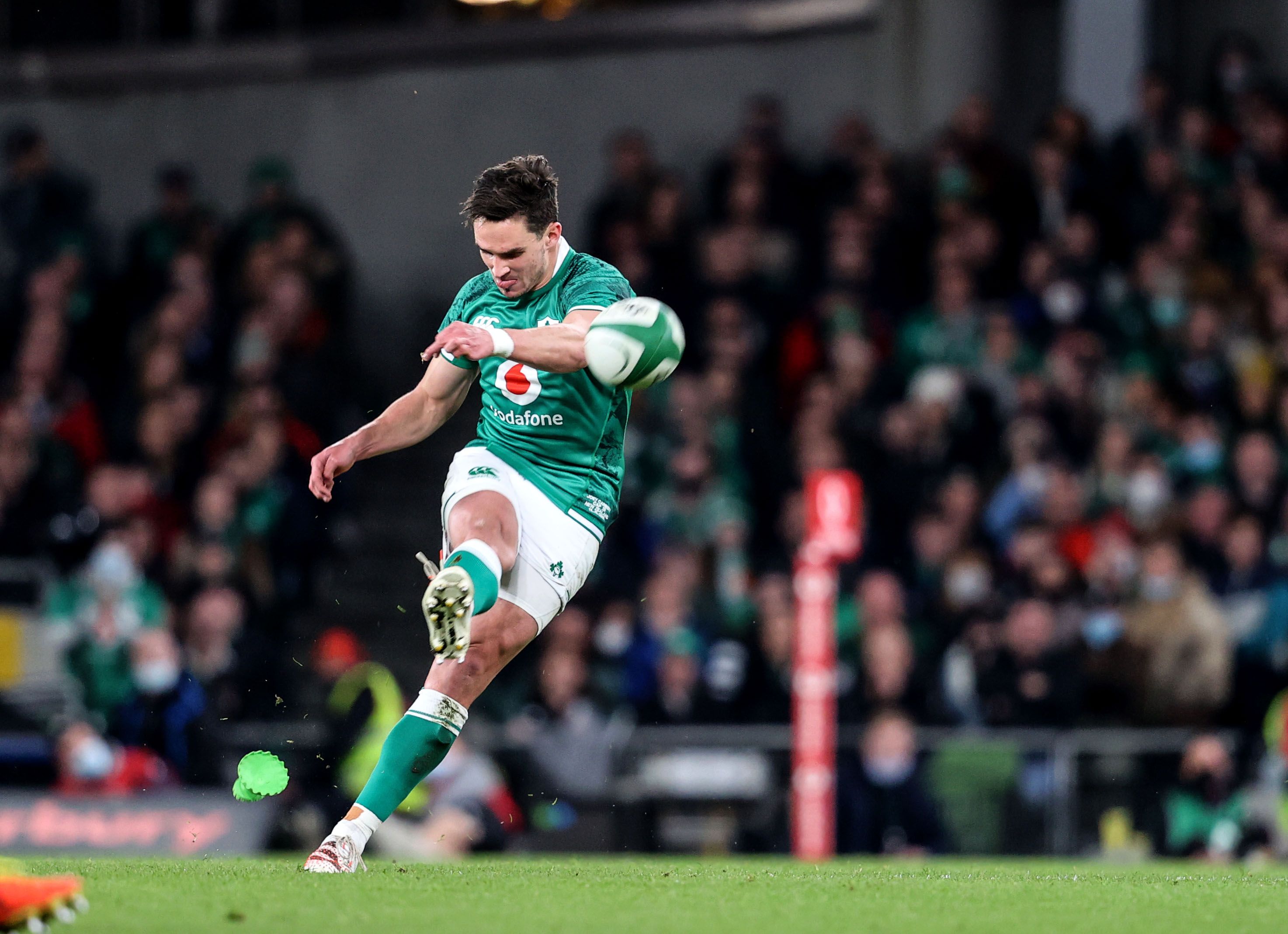 Ireland's Joey Carbery scores from a penalty kick from the half-way line in Saturday's game against the All Blacks at the Aviva Stadium in Dublin. INPHO/DAN SHERIDAN

In more than half a century watching Ireland rugby teams play, this was the best performance over 80 minutes than I can ever remember.

Head Coach Andy Farrell sent his warriors out to play the world’s No. 1-ranked team with a simple war cry of: “Don’t be afraid to try things.”

From the first whistle to last, Ireland took the game to their more vaunted opponents, and when adversity came their way, they showed they weren’t afraid to continue fighting on the front-foot.

They played rugby football devoid of the usual defensive fears and set-ups of the Joe Schmidt era, which brought limited success. The new no-limits emphasis on attacking rugby saw the men in green play unlike any predecessors with a zest for the inventive and a voracious appetite to plow forward as the first tactical  choice.

What resulted was both unprecedented and memorable and the hope is that when we take on Argentina on Sunday that we can continue the growth trend away from conservatism that has already started in the past few weekends against Japan and New Zealand.

Yes, these autumn tests can look like out-of-season friendlies in other codes but when the All Blacks come to town, and when the Aviva Arena is full to capacity with a feverish crowd backing your every move, the game takes on something of a nation-stopping in its tracts significance.

Beating our visitors by nine points was something of an injustice because we were twice the team they were and would not have been flattered by a 20-point winning margin on the day.

Ofen we were camped on their line to suffer dubious penalty calls against us and then when Tadhg Furlong burst over for what looked like a really good team try, the referee ruled it out by referring back to a Ronan Kelleher double move in the tackle long before the ball was touched down.

Though we had the tonic of a James Lowe first-half try against his native country, when we went into the half-time invertal 10-5 behind, we thought the game might unfurl – as many in the past did – with New Zealand weathering the storm before producing an avalanche of seocnd-half scores.

His though was whre the script radically differened with those produced in the past.

Instead of bowing the knee, Irelandf assumed a massive dominace in the third quarter and once Kelleher and man of the match Caelan Doris scored two great team tries of different hues, the confidence began pumping through the veins that victory was achievable.

Leading by 20-10, you also knew that the All Blacks would not go lightly into the losing corridors…and so it proved.

New Zealand had produced little or nothing once the Irish defense had sent out word that every score would be hard earned. And it had been, except for the time Dalton Papalii galloped through a huge gap caused by missed calls between Kelleher and Furlong at the back of a lineout which allowed Taylor to dive over for a try converted by Jordie Barrett.

Their big surge to get back in the game saw Will Jordan, collecting the ball in space, delicately chipped ahead for Rieke Loane, who swopped the pass back for a touchdown under the posts.

While Sexton missed two conversion attempts, his replacement Joey Carbery had his sights set from the off and ended up kicking the three penalties – one from the halfway line – which proved to be the margin of victory in the end.

Sandwiched in between his first and second was a disallowed Kiwi try for a forward pass. But Barrett reduced the deficit with a penalty leaving the game on a knife edge of 23-20. However, the heartache finishes this time was for the visitors who were simply outgunned as Ireland forced two turnovers, the biggest one coming from replacement Peter O’Mahony’s penalty win.

Afterwards, New Zealand Head Coach Ian Foster praised Ireland as the best team his side had faced under his tenure, adding that the homesters were totally deserving of their victory.

“I was really impressed with them today, they played a high-tempo game, kept us chasing. When it really mattered at the end, we just didn't quite have the composure to take the opportunity that we had presented to us. That was a very, very good performance and probably the best performance I've come up against in my time. I thought they were pretty polished," he conceded.

Ireland’s on-field general Johnny Sexton says there is a growing belief in the squad that they can do something special.

“I thought we played some great stuff in the first half. I don't know how we went in 10-5 down at half-time.We were brave with some of our calls. In hindsight maybe that first penalty we should have taken three but they had a player in the sin-bin and I thought let's have a go.

“Belief comes from looking across and making sure you can trust your team-mates to prepare well and show up on the big day. That's where belief comes from. We didn't have that because we hadn't done that consistently enough as a team last year. Six Nations, we had a tough start but we've won seven on the bounce now so there is that belief now that if we can play our best, then we can get good results. That belief is there now but last week, was it there 100%?

“No, we've got to get it out here and show we can play well and see what we can do. As Faz [Andy Farrell] said, it's making sure you do all the things you have to do and then the results will look after themselves. We've already identified that this is the start of a two-year journey and we've said that. This is the start and it's important that we continually improve.

“Obviously, this being a peak is no good to anybody.I think there is room for improvement individually. There's room for improvement from that first half, doing things to make sure we take our chances because we could have scored a few tries in the first half that would have counted. There's a lot of young guys, very young, a lot younger than me, and they need to realise that this is still a start and we need to keep building.

“The great thing about beating New Zealand is that it gives a lift to the country, but you don't win a trophy and you don't have something to show for it, as such. As happy as we are, we need to push on,” he declared.