Home by that line of crepe myrtles 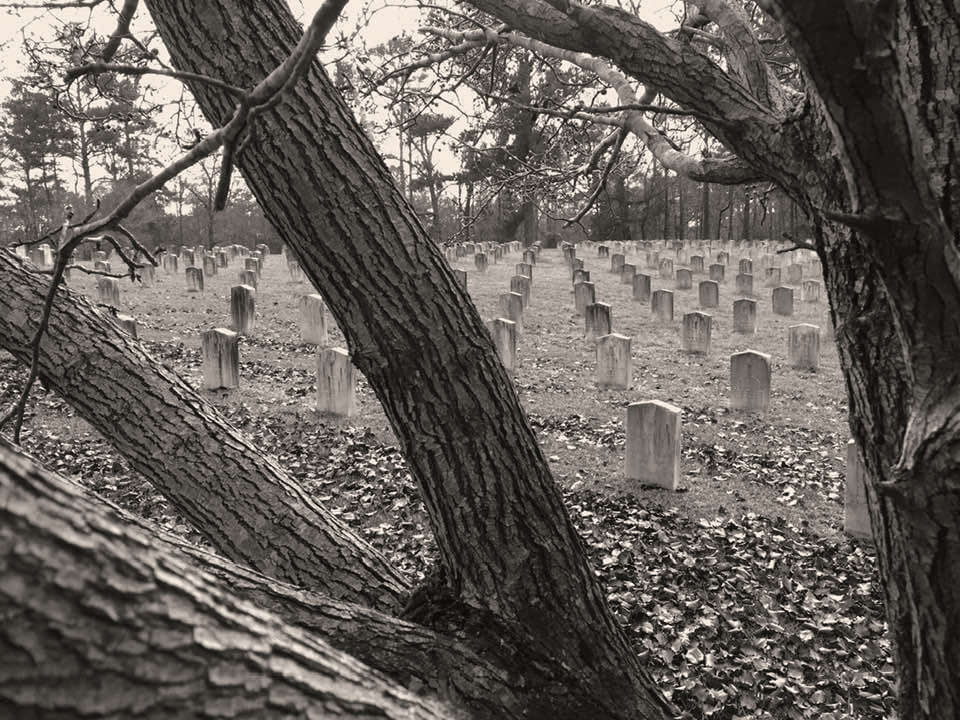 The author grew up a mile from this Civil War cemetery in Lauderdale, Miss. He went there often as a boy and visits each time he goes home.

by that line of crepe myrtles

they told us to dig the graves by that line of crepe myrtles, so we did. today there weren't too many, only five, and percy was helping me. but it was still hard work, and the sun was dang hot, and the sweat bees and the deer flies pestered us all day long till we was done.

after i cooled off unplanned in the creek. i was gonna swing across on a sturdy grape vine i cut with my rations blade, but it broke midway and i fell smack into the middle with a pretty big splash and percy laughed till his stitches popped which meant he should go back to that dreaded surgeon who everyone rightly feared. bigbee was the only one we knew with an intact housewife, so we went to him later instead. he sewed better than the surgeon any day.

when i fell into the creek i ruined a letter slipped between the pages of a little black book a girl gave me at the church across the road. i been seeing her there for a few sundays and i could tell she liked me like i liked her. we talked once, before her mother and the preacher's wife stepped in between us. that was a church where they don't like soldiers, i could tell. the sermon was about the lord not letting king david build the temple because he was a warrior. it hurt king david (the writer of many beautiful songs) to hear that, and it hurt me too especially since i never asked to be here and was only pressed into it when i was found hiding in a tree holler way out past our barn and not too far from where old man booker had a still. they took me and what liquor they could fit in their knapsacks. i figure their superiors was doubly glad when they got back to camp.

i never read the letter. aubry told me mess was beans, collards, eggs, and cornbread. a foraging detail had brought back all the above from sumpter county over in alabama yesterday. there was even peach cobbler i heard. in my haste i grabbed my tin and spoon and made way for the cook's wagon. i saw from the note her name was leah which i thought fit her though i never met a leah before. i know jacob's first wife was leah, but he didn't love her as much as his other wife rachel. i knew i could love this leah given the proper chance and given the proper blessing of friends and family. i had studied her like the plan for a house in church these three sundays. she was pretty and stalwart and sweet. the way she sat straight and attentive, and the way she smiled at folk who spoke to her, and the way she carried herself across the clearing where the church was impressed me greatly. if i was of a mind to marry her my family would take her in heartily i knew. her family wasn't about to take me in though, of that i was most assured. not because i wasn't big and strong enough or bright enough. i had tilled whole fields with no mule, and i had taken top honors at my school before the hostilities. no, they just didn't like soldiers here, not the ones in butternut, not the ones in faded blue. i'm sure they had their reasons, but it hurt nonetheless.

so her letter was quite welcome. i wasn't sure what exactly she wanted to say. i was a little, but not altogether surprised when she shuffled too close behind me, looking the other way, and stuffed a little black book into my tattered coat pocket. when outside in the bright sun i reached my hand in and fished it out, making sure no one saw. between the blank pages was a folded letter, written it seemed on onion skin, on one side it said handsome soldier. on the other side it said leah. that's as far as i read before aubry told me about the fancy mess in the cook's wagon under the dusty shade of the broad bay tree. i was truly hungry and happy for the news. so i slid the paper and the little book back into my coat. t'would be my honor to tend to you after i said to the paper and the book, which of course i meant sincerely.

cook to be honest wasn't much of one. he worked as a teacher before and it showed.  but he had heart and his two specialties were trying really hard and a pot of stuff he called chitterlings cassolette which i didn't much care for. but even my little sister could handle beans and collards and eggs. so yes, i was still excited. regarding the cobbler, i had a modest bet with davis that it would be good enough, who of course himself was betting that it would not.

about the outcome of the cobbler, i only have the competing words of honor of two supply clerks from corinth in company g attached to the 23rd infantry and two corporals from company d 6th cavalry, one was from natchez, the other from somewhere up around memphis. so at this point i'm not sure who should pay who. from my experience i would usually go with the word of corporals, but i was infantry and fancied my word as true in almost all instances.

as for the other victuals, they was good, and i ate near my fill. it was when i was in line for cobbler that a sergeant pulled me and percy to the side and said we were now officially on shovel detail, which was the horrible worst. he handed us two shovels and told us to report to the hospital tent post haste, so off we went, gazing back at the fine spread of food with love and longing. no telling when we would be showered like that again, maybe never. things hadn't been going so well of late.

nobody in this unit liked being handed a shovel. it could only mean one of two things both bad, though of the two, latrines was much more pleasant to dig.

at the tent, a doctor just pointed at some cots  by some barrels over by an oak tree. when we said where, his assistant, an enlisted man just like us but who was wearing a white  medic jacket/overshirt said, i was told to tell you over toward the right, by that line of crepe myrtles. he added, they is only five today, so they're ain't no added beer ration from the quartermaster. if we was digging three apiece we would get one, but we clearly saw there was only five.

if you never saw what war could do to a man or a boy when he could fend it off no more, i don't want to be the one to tell you. suffice to say one had been hacked with a broadsword about the shoulders, two had been shot one in the face one in the back, and two must had died from some disease since neither had a scratch on them.

like i said earlier, it was hot and the bugs pestered us all day. we did as we had been told, five regulation field refuse trenches over by the crepe myrtles, my mother's favorite flower, on a fairly raised hill looking out over the rutted red dirt road between lauderdale and kewanee. all in all it wasn't the baddest place to lay down to rest. no not at all.

the letter. i never could figure another word of it, the ink smeared out in hopeless broad smudges. no matter what i done to decipher it, there was no use.

and the girl, i never saw her again. we got pulled out of those parts and was sent by rail from meridian over to virginia where things was worse by far.

i hate war .. hardly two weeks went by before just to the north in pennsylvania i caught a really bad one running across a cornfield. i'm afraid i didn't make it.

Gary Ryan studied philosophy at Ole Miss and theology at Harvard. He has written for the AP, worked for the Archbishop of Canterbury and was chaplain at Massachusetts General, Columbia-Presbyterian and Mt. Sinai hospitals. A member of Artists Without Walls, he lives in New York.