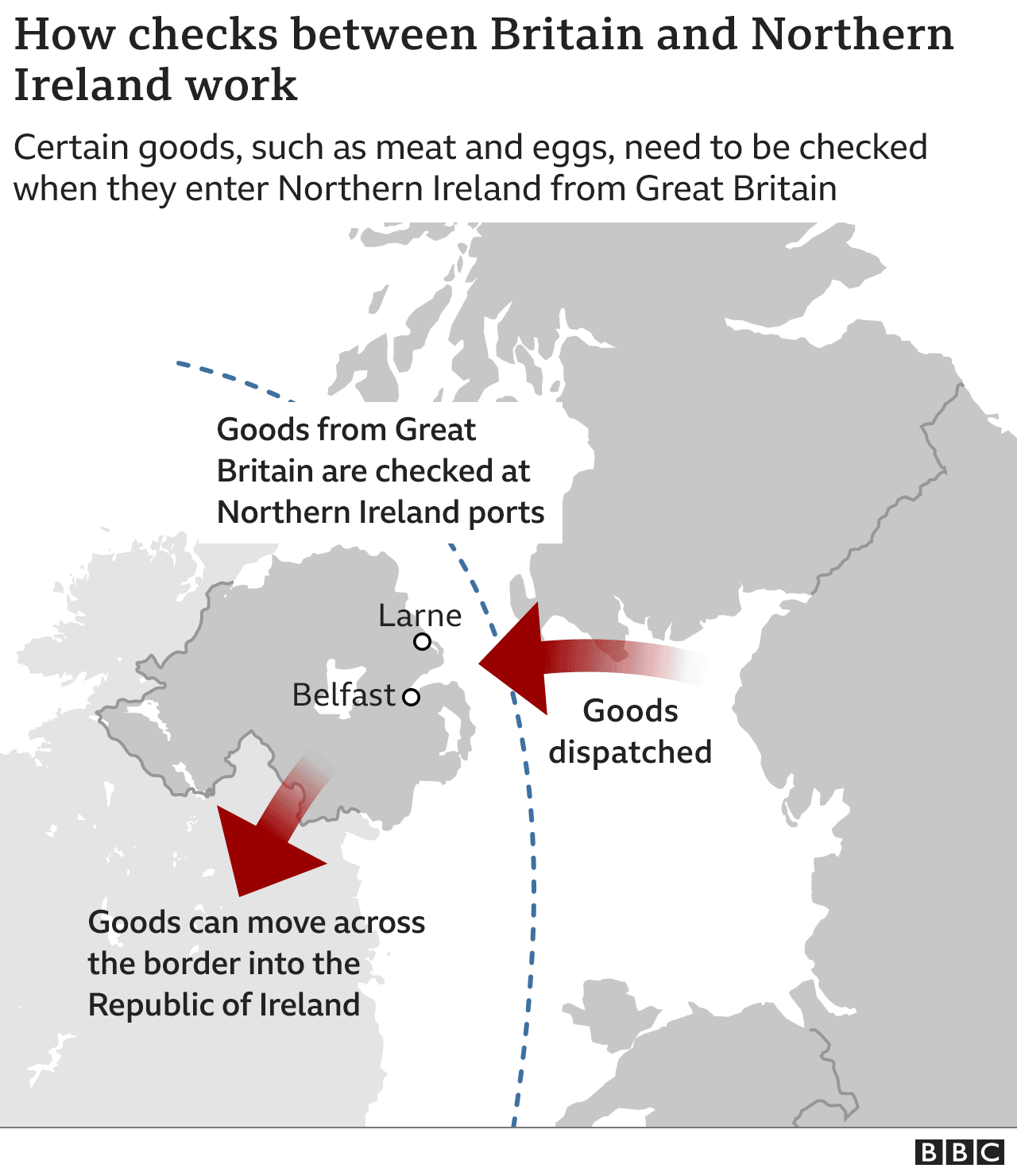 Back in the dark days of mass emigration and high unemployment the Republic of Ireland was an easy target for unionist jeering and jingoism.

Why, unionist leaders would say repeatedly, would Northern Ireland ever want to be united with an economically backward 26 counties.

Northern Ireland was part of the United Kingdom and was a relative economic power house.

Now there's nothing wrong with the North progressing economically as far as this page is concerned. This page is an unabashed cheerleader for the North's all round economic, business, social, and political progress.

But it's hard to cheer when the things worth cheering about appear to be in danger.

What of the North's future joined to the hip to Brexit Britain, an economy that lately needs soldiers to drive commercial trucks?

Well, things do not look all that rosy though the North though at least those within its confines that see a chance for economic advance appear to realize that the Irish Sea Protocol is actually an advantage because the six counties - where a majority of voters rejected Brexit back in 2016 - actually benefits from being in the EU's common area for trade and the movement of goods.

That's not persuasive enough for the likes of unionists Jeffrey Donaldson and Jim Allister.

Also not persuasive for this duo is the fact that the once so easily dismissed Republic is now an economy well worth hitching up with.

Sure, the economy of the South has had its ups and downs. The Celtic Tiger was seriously off the reservation, but what Ireland offers today is a solid base for a North/South partnership that will benefit greatly the people of the entire island.

Okay, don't call it unity; not yet. But unity of purpose in pursuit of a common prosperity works fine.

The Republic does have its issues to deal with, not least the matter of corporate tax.

According to an Irish Times report, Tánaiste Leo Varadkar will insist that Ireland remains a “fantastic” location for investment despite the uncertainty over the future of the 12.5 percent corporate tax during a two-day visit to the United States.

The visit to Washington D.C. comes as Ireland faces pressure to sign up to an Organisation for Economic Co-operation and Development (OECD) deal that would see the introduction of a minimum global rate of at least 15 percent.

The Times report continued: "Bill McLaughlin, founder of Irish-American Business Chamber & Network (IABCN), said Ireland is 'still viable' as a destination for investment for reasons other than tax.

But his advice to companies for now would be 'to hit the pause button until it gets worked out.'

"Ireland-US Council executive director David O’Sullivan said his organisation believes an increase in the tax rate 'would be a bad thing' and would 'absolutely” harm inward investment to Ireland.'"

According to the Times report, Taoiseach Micheál Martin signalled during his recent visit to New York that the 12.5 percent rate could change in response to international pressure to make multinationals pay more tax.

"He said he would not be making commitments to U.S. companies 'one way or the other' that Ireland will be keeping the rate that has been a cornerstone of the country’s bid to attract inward investment for decades.

"Mr. Varadkar, the Minister for Enterprise and Trade, will hold meetings with his Biden administration counterparts US secretary of commerce Gina Raimondo and ambassador Katherine Tai, U.S. trade representative.

"Mr Varadkar will also take part in a roundtable meeting with the US chamber of commerce during his two-day visit to the US capital.

"Asked about his message in the US in the absence of certainty on the 12.5 percent rate, Mr Varadkar told The Irish Times: 'What I’ll be saying to businesses that I meet is that Ireland remains a fantastic place to do business.'

"He listed four strengths that 'set us apart' including a young, well-educated workforce and competitiveness 'underpinned by an attractive business environment, which is a factor of many things, including our tax environment.'

"Mr Varadkar also cited Ireland’s connectivity 'with a 70 million diaspora and truly international workforce' and its position 'at the heart of Europe, its single market and euro zone.'

"He added: 'We can’t say at this stage whether we will sign up to an international agreement or not, but we’ll only sign up to it if we believe it’s in the interests of our economic interests in the round.'"

"Mr McLaughlin said that he doesn’t believe that major companies would necessarily leave Ireland in the event of a corporate tax increase if the rate remains competitive but also cautioned 'companies have moved for lesser reasons than that.'

"He said the Irish Government has been good at acting fast to support the needs of business and he said a suggestion by Mr Varadkar last week that the 12.5 percent rate could be kept for businesses with less than €750 million turnover 'resonates.'

"But he predicted it will be a 'really tough road ahead” because 'even Joe Biden who loves Ireland' is pushing for an increase in corporate tax rates.

"New-York-based Mr O’Sullivan, a former IDA representative in the US, said: 'Capital goes where capital is treated well. If you tell a company that you’ve got a deal for 12.5 per cent corporation profits tax . . . and then it becomes uncertain you don’t need to be Einstein to figure out that that would be a cause of concern.'

"The Ireland-US Council believed an increase in the rate would 'absolutely' be detrimental to investment in Ireland, he said.

"IDA Ireland has said it is not its experience that companies are holding off on decisions to locate in Ireland while the debate over corporation tax continues and pointed to a 'strong flow' of investments in 2021 to date."

Some hard nosed and realistic stuff here but what can be taken away from the Times report is that the Republic of Ireland has gained much in recent years so, yes, has potentially much to lose.

But this is typically the case for a dynamic and growing economy, an economy with relevance in the wider world.

The Republic's economy needs to be taken seriously by the unionist North.

That entity can no longer turn its nose up at what exists to the south of a border that is, rightly and logically, a steadily diminishing barrier to economic and business progress for the entire island.