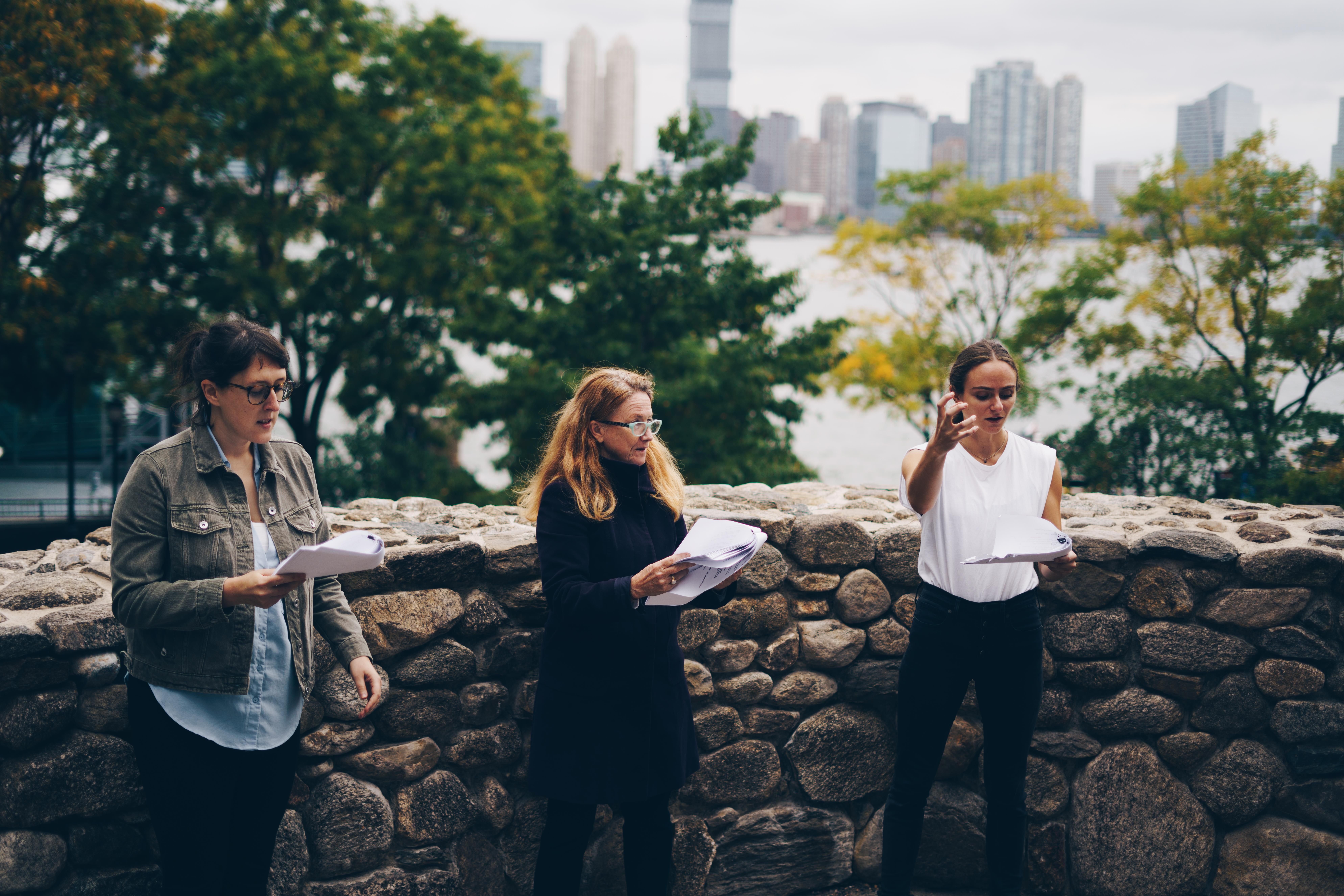 A piece set in the Rotunda performed in a place echoing Newgrange. [Photo by Ternatski]

Taking audience on ride through time

I lived in Tribeca then. I was training for the 2001 New York City marathon and every morning I’d run past the ferries, past the office people, stepping onto the waterfront, walking into their days in the silver towers.

As I looped around the bottom of the island I’d pass a worksite – a tumble of grass and dug-up soil with fluorescent flags marking off various areas. Was there a sign saying this was the future sight of a memorial to Ireland’s Great Famine and the millions who died or were uprooted during it? I don’t remember. It was apparent to me, however, that someone was making room for Ireland on this splendid half an acre. On my morning runs, I always kept a keen eye on how the memorial was growing.

One blue-skied morning I did my usual down-and-back and was home by 7 a.m. It was Tuesday. Voting Day. In the elevator, after voting, our entire 40-story building lurched – then settled back into itself. Out on the street with my neighbors watching the towers – that airplane-shape – a jagged mouth on the side of the North Tower, so far above us. And the world changed, utterly.

I never saw what happened with the Irish Hunger Memorial after that. I never ran southward again.

Until September 2021, that is, when director Britt Berke and I came to the memorial to see what sort of theatrical magic we might get up to here. I’d been awarded an NYCity Artists Corps Grant funded by a $25 million New York recovery initiative. The grants have supported 3,000 New York City-based artists whose lives and work have suffered in the wake of COVID-19. This brilliant initiative has reinfused and revitalized this city of ours with art and music and theatre and film and poetry and literature and dance and all manner of pop-up brilliance beginning in mid-July through the end of October.

Britt and I have been developing “Round Room,” a play about childbirth set in Dublin's famous Rotunda Hospital. The Rotunda opened in 1745 and is the oldest maternity hospital in the world. The Rotunda’s very architecture serves as the structure for the play:  the public labor ward, operating theatre, the “room for the dead to lie” and other corridors and passageways. Created by visionary artist Brian Tolle, landscape architect Gail Wittwer-Laird, and architecture firm 1100 Architect, the Memorial echoes Newgrange, a prehistoric Irish monument that served as a burial place and passage tomb millennia ago, and is the perfect setting for a piece covering thousands of years of Irish women’s experiences of birth, death, hunger, and transcendence.

On Saturday, Oct. 9, at 4:30 in the afternoon, actors Clemmie Evans, Carina Goebelbecker, Barrie Kreinik, Caroline Winterson and Zoe Watkins gathered at the entrance to the Memorial – and the event began. A second showing took place at 5:30.

For the occasion, I assembled a “Round Room” excerpt called “Into The Silver Mouth [of time].” This selection was designed to fit snugly within the Memorial and take the audience along for a ride through time. Audiences entered through the main passage (“Into The Silver Mouth – Monologues About Childbirth”), moved into a stone cottage (“Roofless Home – Domestic Scenes”), and walked the winding path (“Green Path To The Sky – Death and Rebirth”) to the top platform (“Into The World – Choral Chant About The Diaspora”).

When I was a girl in Dublin I used to play in the ruins of a black stone turret on the Dublin Strand. My big brother told me it was once a castle. We climbed all over it like mad ants and conjured plays about Irish high kings. I recalled that childhood thrill as the performers and audience mingled, completely immersed in the play, immersed in the Memorial. It was everything I suspected theatre could be if brought outside into the light of day.

In the play’s final moments, standing atop of the Memorial, overlooking the Hudson on a silver-gray Irish day, I think we felt – audience and actors alike – the layers of time overlapping, the simultaneity of the ancient, the contemporary, and the timeless.

I think we felt the city, this magnificent city, stirring all around us – coming back to life.

Thanks to the NYC Artist Corps, Consul General Helena Nolan and the Irish Consulate, Kevin McCabe and Nidia Blake of the Battery Park City Authority, and artist Brian Tolle for making a day like this possible.