AFTER a week when much of the attention was on dwindling crowds, Tipperary and Cork showed exactly why the All-Ireland Championships are of such tremendous value.

All-Ireland Hurling champions Tipperary beat their arch-rivals by 3-22 to 0-23 in a gripping Munster Championship first round tie at Semple Stadium. The attendance of 31,231 was 5,561 down on the corresponding match last year but somewhat better than many had predicted.

And those who went along to Semple Stadium could hardly have asked for more. Cork, it had been argued, were not supposed to be up to much and were unlikely to give Tipperary a real battle.

Only they did, and in some style. Indeed, at one stage in the second half, they had rattled off seven points without reply to draw level at 2-15 to 0-21.

Supporters of both teams must have throught about the prospect of Cork repeating last year's victory over Tipperary at a similar stage. But, just as the pressure came on, Tipperary responded, scoring 1-4 in the last four minutes.

At the finish, Cork could quite rightly claim that the eight-point winning margin was very flattering. It was, but they would also have to admit that this is what this Tipperary team can do to you.

They are a long way removed from the side which lost to Cork a year ago. The achievement of beating Kilkenny to win the All-Ireland have moved them on to another level in terms of confidence.

They now seem to have that that priceless ability to raise their game when the occasion demands. Lar Corbett and Eoin Kelly banged in two superly taken first half goals, and it was Corbett who again came up with the goods when he put over the point which halted Cork's second half scoring surge.

There was also an outstanding contribution from Seamus Callanan, who contributed five points from play, while Noel McGrath pointed two wonderful sideline cuts.

Kelly finished with 1-7, five of which were from frees, but even that was somewhat behind the achievement of Cork's Patrick Horgan who accumulated 0-13, which included 10 frees. This was a very good effort from this Cork outfit which was comprised of the old and the new and it's now going to be fascinating how they progress in the qualifiers.

Manager Denis Walsh, although disappointed to have lost, felt his side had proved a point. "We were nothing in many people's eyes coming into today's game. We found that embarrassing really." he exclaimed.

"We needed to perform, we just needed to show what we could do. And I like to think we did that."

The problem was, of course, that they still lost by eight points. As Walsh rightly pointed out, Cork didn't play badly in the first half but when then caught with those two goals by Kelly and Cobett which enabled Tipperary move ahead by 2-11 to 0-10 at the interval.

It hardly seemed fair, but then came the Cork fightback which saw them pick off a series of spectacular long range points to somehow draw level. But, when the going got tough, Tipperary got going again and finished with a flourish, Benny Dunne getting the third of their goals following a mistake in the Cork defence.

Tipp boss Declan Ryan had reason to be pleased, particularly with the attack. Quite apart from the contributions of Corbett, Kelly and Callanan, Patrick Maher had a really good game and John O'Brien gave a decent performance.

Ryan commented: "The most pleasing thing about the game was that we held our nerve and didn't panic. I think it shows the character that's in this team. I'm very proud of all the players."

Above in Croke Park in front of a disappointing crowd of 14,302, Dublin manager Anthony Daly also saw his side overcome difficult opponents when the National League champions got the better of Offaly by 2-21 to 1-20 in the first round of the Leinster Hurling Championship. Again, Daly must have wondered if his team would survive against tenacious opposition.

It was very different from Dublin's National League final success over Kilkenny. The pressure was now on them, all the more so because they had lost out to Antrim in first round of last season's Leinster championship.

This time, they survived, but it took a late goal from substitute Peadar Carton to settle matters. It was hardly the sort of performance designed to frighten their next opponents Galway, but, then again, this could be just what the Dubs need after the excitement of winning the league title.

Credit must also go to Offaly for a very encouraging display. They had the best player on the pitch in Shane Dooley who contributed 1-13 of their total.

What's more, they had to play the last 10 minutes with 14 men after Derek Molloy received a second yellow card. That said, in many ways, the sending off of Molloy, seemed to revitalise them as they roared back at Dublin in the closing stages.

Having made life very difficulty for themselves when only leading by 1-9 to 1-8 at the interval, Dublin seemed to have things well in hand when they moved eight points clear with 10 minutes to go. But back came the depleted Offaly outfit to reduce the deficit to just 1-21 to 1-19 going into the closing minutes.

It was then that Carton did his thing, rattling home a smashing goal to end the Offaly's challenge. All's well that ends well, but Daly did admit that he was badly worried during that Offaly fightback.

"I'd be a liar if I said that the Antrim defeat of last year didn't flash through the head. But fair play to Peadar Carton.

"We always knew that this was going to be a battle. We'll need to improve for the Galway game but it's one we're looking forward to."

Offaly can now face the qualifiers with increased confidence. Besides the sending off, which many felt was harsh, they also had good reason to complain about Alan McCabbe's opening point for Dublin which was clearly wide.

The remaining Leinster Hurling Championship first round tie saw Wexford account for Antrim by 3-16 to 1-11 at Wexford Park. At half-time, Antrim seemed to be in with a real chance when trailing by just two points after playing into the wind.

But an eight-minute spell just after the resumption ended their hopes. The game's outstanding performer Rory Jacob scored 1-1 as Wexford extended their advantage to 2-12 to 1-9.

That ended the Antrim challenge. The Ulster side just ran out of energy and ideas as Wexford coasted to a comfortable victory.

Next up is a very different challenge against Kilkenny at the same venue in the Leinster semi-final on June 11. But Wexford manager Colm Bonnar is looking forward to the challenge.

"Kilkenny are going to be raging hot favouites. But we know what to expect and we are just happy to have got the victory over Antrim behind us."

LAST year's All-Ireland Football Championship runners-up Down fell at the first hurdle of the Ulster Championship when they were beaten by 1-15 to 1-10 by Armagh at the Morgan Athletic Grounds.

Their problem was that they came up a top-class Armagh outfit. They won a cracking match with goalscorer Jamie Clarke proving inspirational.

By Down's high standards, this was a disappointing loss, but no one will be foolish enough to write them off. They have the skill and know-how to make another determined bid in the qualifiers.

Where does that put Armagh? They are a very useful outfit on the basis of this display and, yet again, are going to be very hard to overcome in the Ulster Championship.

Understandably though, manager Paddy O'Rourke is not getting ahead of himself. He said: "I have always believed their is a big performance in this team and I'm happy to see that it has been delivered. But the important thing now is that we must build on this; it cannot be an end in itself."

Armagh will now face Derry in the semi-finals. Some interesting news from the Down camp is that Martin Clarke, their main contributor with 0-5 last Saturday night, will resume his Aussie Rules career at the end of the season.

Elsewhere on the football front, Wexford comfortably saw off Offaly by 2-16 to 1-9 in the first round of the Leinster Championship, while Mayo needed extra-time to get the better of London in the opening round in Connacht. Mayo, in fact, came within minutes of a sensational defeat in Ruislip.

They trailed by 1-9 to 0-10 with four minutes to go. But points from substitute Trevor Mortimer and Kevin McLoughlin brought the game into extra-time.

Eventually, the superior fitness and skill of Mayo told but they will be far from satisfed with this effort. Clearly, much better will be needed when they take on Galway at Castlebar on June 28 in the Connacht semi-final.

"You can make a lot of excuses but London were very good and we were off-kilter. But we came through and that was the objective coming over." stated Mayo manager James Horan.

Wexford had it so much easier against a disappointing Offaly outfit at Tullamore. An important difference was Wexford's capacity to take their opportunites, while Offaly missed several good chances.

Ben Brosnan made an impressive championship debut for Wexford, scoring 0-7, while Ciaran Lyng (1-6) was also very good. Wexford will now face Westmeath in the Leinster quarter-finals.

LEINSTER'S hopes of a double ended with a 19-9 defeat to Munster in the Magners League decider at Thomond Park.

The recently crowned Heineken Cup champions could have no complaints. Munster deserved their success which brought an encouraging end to what has been an erractic season.

As always, they are virtually impossible to beat at Thomond Park. Okay, they did disappoint when losing to Harlequins in the Amlin Cup semi-final recently, but that probably made them even more determined to capture the Magners title.

This was one of their best performances of the season. They defended brilliantly when they had to, stopping Leinster scoring a try, and managed three tries of their own.

Leinster never really manged to capture the form which saw them conquer Europe. Still, they looked to have a good chance of victory when leading 9-7 with 15 minutes remaining but it was the more determined Munster who finished the better, a deft Ronan O'Gara kick setting Keith Earls up for a try and Leinster then conceding a penalty try.

Most importantly, the victory sets up Munster for next season. They now have an excellent back three in Earls, Felix Jones and Doug Howlett, while Lefimi Mafi had his best game of the season in the centre.

But it was the rejuventated David Wallace who was the star of the show. Howlett scored Munster's first half try, while Ronan O'Gara landed two penalties.

Johnny Sexton was responsible for all of Leinster's points with three penalties. But his team will be disappointed not to have scored a try, given that they lay siege to the Munster line for periods in the second half.

Overall, however, there was no doubting the merit of Munster's victory. And, in the context of the upcoming World Cup, it was important as it revealed to Irish coach Declan Kidney that there is some real strength in depth within his squad. 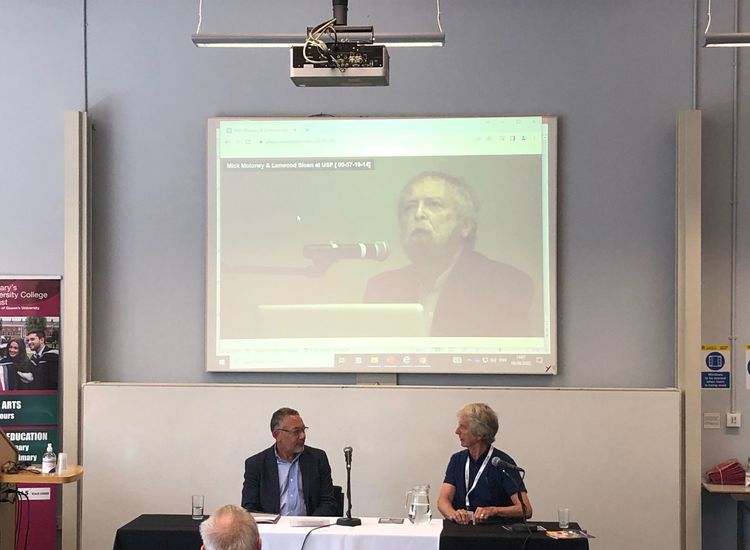